News
Rural Minnesota
This project is made possible by a grant from the Otto Bremer Foundation.
May 27, 2011

Mahnomen County is home to the White Earth Indian Reservation. It’s actually more accurate to say that White Earth is home to Mahnomen County. The largest Indian reservation in the state encompasses the entire county. Mahnomen is notable for another reason: It has the highest percentage of children and young people under the age of 17, according to 2010 Census data. A full 29 percent of the population there has not yet seen an 18th birthday. Statewide, 24 percent of the population is under the age of 18.

Also at 29 percent is Dodge County in the southeastern Minnesota. Neighboring Steele County is at 26 percent and tied with northwestern Minnesota’s Roseau County. At the very bottom of the list is Cook County at 17 percent, Aitkin at 18 percent, and Lake at 19 percent.

As part of our exploration of rural Minnesota and the young people who live there, we’ll be breaking down the demographic data in a series of maps. We’ll be saying more about demographic shifts in general in future posts. And we’ll be exploring Mahnomen County in particular when we visit White Earth this summer.

Click around on the interactive map we’ve created using age data from the Census. When you click on a county you’ll see the total population, the percentage under 18, and a pie chart shown the breakdown for the other age brackets. 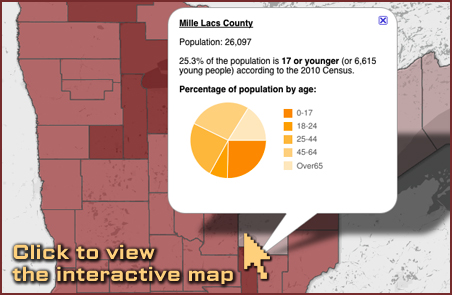 You can also view or download the raw data, including information on all age brackets and breakdown by gender. We only ranked counties designated as rural by the U.S. Department of Agriculture.