News
Rural Minnesota
This project is made possible by a grant from the Otto Bremer Foundation.
May 13, 2011 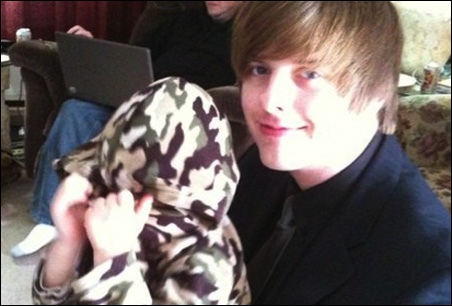 Courtesy of Matthew Sullivan
Matthew Sullivan: ‘There’s this thing that’s a lot like Facebook for programmers; it’s called GitHub. You can see what kinds of open source things people are developing, and they’ll explain why they’re doing it this way or that.’

Matthew Sullivan, 19, is a student at Hibbing Community College. He’s been messing around with computers since he was little. He’s a self-taught computer programmer hoping to formalize that knowledge at a school in a big city.

Note to readers: There is some tech jargon in here, but not too much. Where it appears I’ve linked to the appropriate Wikipedia page. Don’t worry, it’s OK to do this with tech stuff.

MinnPost: When did you first get your hands on a computer?

MP: How were you introduced to HTML?

MS: Do you remember something called Neopets? It was a virtual pet website where you’d have these little pets you take care of to earn points and you can buy stuff with the points. You could also make “guild” websites [where likeminded Neopets users could congregate] using HTML. Other people had really cool guild sites so I learned to make them too.

I refined what I learned there by customizing MySpace pages. You were able to go in and edit the code. I designed my own MySpace themes and made a couple for other people.

MP: Did you have friends who were into this kind of thing too?

MS: Just my brother. Most people didn’t really know much about it – they just thought it was this mystical thing. They still do.

There’s definitely the Iron Ranger mentality with a lot of the older folks here. They grew up with mining; their parents were miners; they’re gonna go be a miner. That’s all they know – it’s all they want to know – and they’re stuck to that path. Those types of people don’t often care about computers or technology.

MP: You’re well beyond HTML now. How did that start?

MS: I’d be on Yahoo! and wondering, “How do they make everything change? How did they make the page look one way when you were logged in and another when you were signed out?” I was looking for the answer – just Googling it – and I discovered the JavaScript language. Until then all I knew how to do was build a static webpage.

MP: Is your brother still the only one who understands programming like you do?

MS: Not even my brother knows it anymore. Well, he thinks he knows a lot about it, but he doesn’t. I can only name one person that I know who does something similar.

It just doesn’t seem like there is much you can do with it in Hibbing. As an example, you could have some sort of website that tells people what’s going on in Hibbing at any given time. But even if people here were really into the web or creating things like this there wouldn’t be much to put on it in a place like this.

Another example: When I worked at Taco John’s I started a Twitter feed for the restaurant. It seemed like it would be fun. Twitter wasn’t popular here, and it never really took off. I thought it was exciting, but the people I worked with didn’t. They were teenagers and dropouts and they just didn’t care. And many of the customers were sort of hillbillyish – they didn’t care either.

MP: How have you sustained your interest in programming and all the rest without a local community to feed off of?

MS: There’s this thing that’s a lot like Facebook for programmers; it’s called GitHub. You can see what kinds of open source things people are developing, and they’ll explain why they’re doing it this way or that. It makes a lot more sense than just reading it from a book you can buy at Barnes & Noble.

I’m on GitHub a lot. I discovered it when I was learning a web application framework called Ruby on Rails. I was going through the guides and there was a list of websites created using Rails, and I saw GitHub and checked it out.

I follow projects that interest me and I try to figure out what people are committing to them. Between work and school there’s never really that much time to do a project of my own, but understanding what other people are doing is more important at the moment.

MP: You’re a student at Hibbing Community College right now, working on an associate’s degree in liberal arts. You’ve told me you plan to leave Hibbing when it’s over. What’s next?

MS: I had been thinking about going to the Twin Cities for a four-year program, but now I’m looking at the Polytechnic Institute of New York University and a section of Northeastern University in Boston that I really like, too.

MP: Has being on GitHub and seeing what other people are doing helped you to figure out what you want from a four-year program?

MS: Oh, yeah, definitely. One of the things that I’ve learned is that in the programming world a degree isn’t always as important as it is in other fields. They still want you to have a degree, but they’re more interested in how creative and out of the box you are.

MP: Is there any kind of business in Hibbing that you could imagine hiring you for your skill set and the skill set you’re working to build?

MS: The only place I could think of would be the hospital or the college. After that there’s really nothing.

MP: Do you think you’ll ever come back?

MS: I’m definitely not coming back. I like things going on. I like culture; I like theater; I like technology. I’m a computer programmer, and I want to be around other people who do that kind of thing, and you’re not going to find that around here.

Range life parable: How ‘the Facebook for programmers’ changed everything