News
Rural Minnesota
This project is made possible by a grant from the Otto Bremer Foundation.
May 10, 2011

MinnPost photo by Sharon Schmickle
Students at the Redwood Learning Center connect via TV with a professor who is 80 miles away.

REDWOOD FALLS, Minn. — Ask a typical late-teen Minnesotan to describe the merits of super-fast Internet connections, and you expect to hear about Facebook friends, music downloads and online games.

Ask Brett Welsh, and you hear about a hard working 19-year-old who counts on cyber speed to help him stay close to his family while also chasing ambitions for a future that depends on a good education.

Five days a week, Brett pulls his GMC Sierra Pickup into the parking lot of a former grocery store that now functions as an Internet learning center. Inside the single-story brick building is a college campus, modest in physical size but huge in its fulfillment of a goal this community worked for years to achieve. 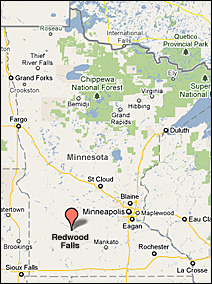 In doing so, Redwood Falls has reached across a divide that defines the new line between poverty and prosperity in rural Minnesota. Education is a prerequisite for prosperity. And increasingly it depends on the Internet connections that enable a student to take a test online, email a teacher about a problem or research a study topic.

A chance to break old pattern
Too often in the past, the Minnesotans who lost their share of the state’s remarkable prosperity were those who were isolated in rural areas — people like Brett whose family obligations tied them to towns that were far from a traditional college campus.

Now, the Internet offers a chance to break that pattern, to bring higher education closer to home for the single parents, displaced workers and others who can’t or don’t want to break small-town ties.

For that reason, there is tremendous excitement sweeping across rural Minnesota. There is anxiety, too, as communities vie for connectivity. This is the race that could determine which communities prosper and which whither or sink deeper into poverty.

Long-distance learning
The classrooms where Brett is earning freshman credits in psychology and logic are dominated by large video screens, not lecture podiums.

I slipped into his logic class.

The instructor was 80 miles away in Worthington. Brett and his classmates could see him on one TV monitor; he could see them on another monitor in Worthington. The instructor called on each student individually to solve problems that involved analyzing sentences such as, “If and only if you want to earn an A must you study for the exam and review the exercises.”

They responded via overhead microphones. And they took notes while students on other campuses solved problems too.

Then the instructor briefed them on what to expect in an upcoming test.

A combination of classes, venues
On the side, Brett also is taking an online class in computer science. And on Monday nights, he drives 50 miles to Granite Falls for a five-hour biology class.

Officially, Brett is a student at Minnesota West Community & Technical College, a member of the Minnesota State Colleges and Universities System. You also could call him a pioneer in cyber learning, something that opens a new world of opportunity in Redwood Falls (population 5,254 in 2010) and even smaller towns across Minnesota. 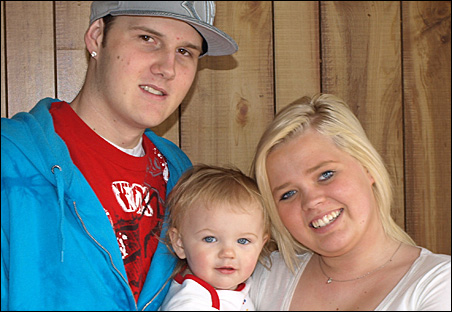 “I’ve always liked technology,” he explained, so this style of learning comes naturally for him.

Even so, he said, “I was surprised when I first came in to this learning center and saw it all was done over TVs.”

If you saw him at a mall, you’d assume he was the typical, carefree late teen. The brim of his ever-present baseball cap forms an awning for a wholesome, clean-shaven face. He wears hooded sweatshirts — and jeans, of course. And he sports small silver earrings.

In many ways, he is typical for his age: savvy about computers, nuts about snowboarding and fascinated by fixing up cars.

On the other hand, consider his load of responsibilities: He has an 18-month-old daughter, Kaelynn Welsh. Brett and Kaelynn’s mother, Courtney Jahnz, met while he was a high-school junior living with his family in Rosemount. Courtney moved with baby Kaelynn to Redwood Falls to be near the support her extended family could offer.

Juggling child care, job and education
Brett followed. He helps watch Kaelynn while Courtney finishes her high-school classes. And he landed a job just up the highway, waiting tables in a restaurant at Jackpot Junction.

Adding higher education on top of that load of responsibilities would not be easy.

The nearest conventional college was 40 miles away in Marshall. Brett estimates the commute alone would have taken more time than his packed schedule can spare, about an hour and a half a day. It also would have eaten up $100 or so a week in gas money at a time when his budget is tight.

But giving up college ambitions was not an alternative for Brett, whose older brother and sister are well on their way to degrees.

As it happened, there was an alternative here in town.

Community effort
Redwood Falls woke up more than five years ago to the need to serve students like Brett. Among other reasons, jobs the city wanted to attract and hold depended on the availability of local training opportunities — classes a medical worker or a factory technician could take during a lunch hour or before work.

“The first thing companies would ask is, ‘Where are your higher education opportunities?’ ” said Julie Rath of the Redwood Area Development Corporation. 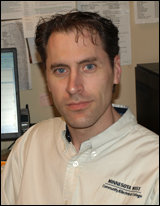 MinnPost/Sharon Schmickle
Michael Van Keulen is the only faculty member at the Redwood Learning Center.

The same question turned up in a survey conducted by a group of local citizens who had taken leadership training and then set out to assess the community’s needs.

“We kept hearing that we really could use more education out here,” said Harry Davis, a member of the leadership group.

The county bought the former grocery store building and agreed to share some space with a learning center. A local bank, the city and Jackpot Junction kicked in $25,000 each, Davis said. Local residents and businesses donated everything from furniture for the lobby to art for the walls.

Students of all ages and needs
Now Davis — who is 50 years old — is one of some 30 students taking classes at the center. He said he broke his neck in a car accident and hasn’t been able to work. After regaining some mobility and taking college classes, he hopes to launch a new career selling insurance.

Other students are single parents. Erin Kiecker, 27, is earning credits toward a bachelor’s degree while also caring for her 4-year-old son and holding down a job at Jackpot Junction.

LeAnn Heimer, 41, is back in school after rearing five kids — two now in college and three at home. She’s working on the last 16 credits she needs for her associate’s degree in psychology, and she expects to start classes next fall at Southwest Minnesota State University in Marshall.

“I’ve gone through two divorces and I’ve got five kids,” Heimer said. “I thought there has to be something out there for me. … I just decided it’s time to be somebody.”

Eventually, Heimer said, she would like to hang out her shingle as a psychologist working in Redwood Falls. 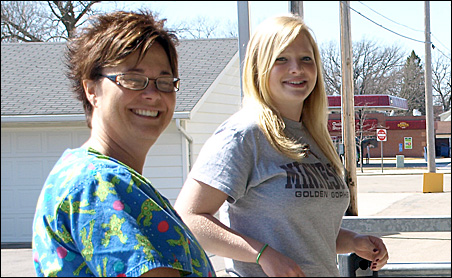 Still other students stretch their education dollars by starting college classes in a place where they can live at home.

“I just thought I would save a lot of money,” said Maddie Faugstad, 19.

“As far as living in dorms and stuff, that’s not a problem,” she said. “I always felt that dorm life was not for me.”

Without connectivity, ‘we would not exist’
Students at the Redwood Falls center can take all of the classes needed for a two-year associate’s degree and for lower-division credits that transfer to other colleges. They also can take technical classes in fields like farm management, automotive work and computer services.

The key to it all was a high-quality Internet connection.

“We could not exist if it were not for connectivity,” said Michael Van Keulen, campus coordinator at the center.

He is the entire faculty on the Redwood Campus. The others appear via interactive TV.

The Learning Center made this possible by tapping into a 10 megabit fiber optic connection Redwood County secured through the state of Minnesota to run its law-enforcement center and other operations. The Learning Center pays for 25 percent of the connection and gets 25 percent of the bandwidth, said Josh Lueck, technology specialist for the county.

Scratching for bandwidth
Still, the Learning Center and its students face technological challenges. Like communities throughout rural Minnesota, the area surrounding Redwood Falls is struggling to find the bandwidth that students — high school and college alike — need to do homework and supplement their on-campus lessons with online classes.

At least one student has tried to work outside of class with a dial-up connection, VanKeulen said, while others grapple with frustratingly slow download speeds.

What that means is that they can’t download PDF files or watch videos that are part of the homework.

LeAnn Heimer, the mother of five children, said that for a while she had no Internet connection at home. She had to come to the Learning Center to use one of four computers set up in the lobby for students.

Brett buys access for his laptop via a USB stick that gives him a 3G Internet connection most of the time in Redwood Falls, where connectivity is better than in the county’s outlying areas.

No parties? No problem
What about campus life, I asked him.

“At first I didn’t know anybody here,” Brett said. “But everyone is friendly, so I’ve gotten to meet most of the people.”

The students broke the ice with a potluck dinner before Thanksgiving. And they occasionally chip in for pizza in the Learning Center’s lounge.

“If I had gone to a community college in the Twin Cities, I don’t think I would have been caught up in the college scene that much anyway,” Brett said.

“Whether or not most kids want to admit it to their parents, a lot of partying goes on at the state colleges,” he said. “People get too caught up in it and they don’t stay on track as much as they should.”

“This has only worked out for the better for me,” he said.

Friday: A Steve Date video on five future farmers from Redwood Falls and Morris, Minn.; and Jeff Severns Guntzel interviews a tech-savvy youth on the Iron Range who wants to move on.