News
Rural Minnesota
This project is made possible by a grant from the Otto Bremer Foundation.
June 23, 2011

We learned from the 2010 Census that Minnesota’s population became more diverse between 2000 and 2010. There are nearly 107,000 more Hispanic residents in Minnesota today than there were 10 years ago. And residents who checked the box next to “Black, African American, or Negro” on their 2010 Census form rose almost as much: close to 103,000 people.

Immigrants settling in Minnesota are driving this new diversity, and as their children come of age and start their own families, Minnesota communities will likely become still more diverse.

We’ve been profiling some of those young people as part of our yearlong project on rural youth in Minnesota. Today we take a look at their numbers and what the Census can tell us about the overall diversity of the communities they’re living in.

I’ve created an interactive map that focuses on people under 18 who were listed on the 2010 Census forms as being only Hispanic, Asian, or “black, African American, or Negro.” 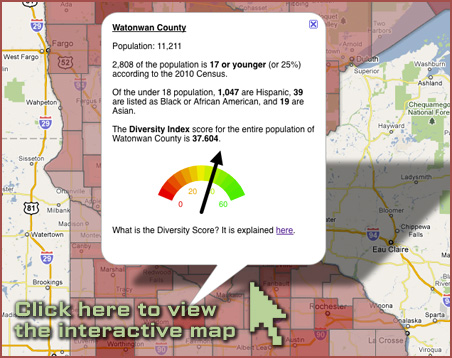 In rural areas especially, anecdotal and demographic studies suggest that these are likely to be immigrants.

Click on your county or any other Minnesota county and you’ll see how many young people of each group are living there.

Measuring diversity
Also included in the map is something called a Diversity Index score for the entire population of each county. I’ve included this to give a feel for the diversity (or striking lack of it) in the communities where these young people are growing up. 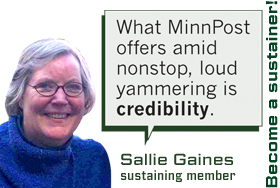 The idea behind the Diversity Index is simple, even if the calculation is a bit complicated. Here’s how its creators over at USA Today explain it: The Diversity Index (a number between zero and 100) “represents the probablility that two people chosen randomly from an area with have different racial or ethnic (Hispanic or non-Hispanic) backgrounds.”

Put simply: A score of 45 means there is a 45 percent probability that two people will have different racial or ethnic (Hispanic or non-Hispanic) backgrounds.

To give you a point of reference, Minnesota has a Diversity Index of 31 (up from 22 in 2000). The highest score for any county in Minnesota is 60 (Mahnomen County). Here’s the map. Click away!

Interactive map: Where are the immigrant youth in rural Minnesota?