News
Rural Minnesota
This project is made possible by a grant from the Otto Bremer Foundation.
June 7, 2011 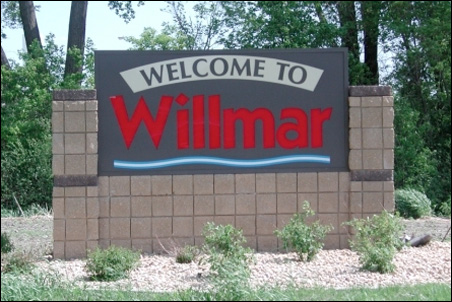 ci.willmar.mn.us
Living simply doesn’t have to mean quiet or boring. It can mean quite the opposite, actually: rich and interesting.

WILLMAR – Through its series on rural youth, MinnPost is chronicling the lives and prospects of young people and exploring an important decision they face: whether to leave the small towns where they grew up for the Twin Cities or other metropolitan areas.

For many young people, the decision is easy. Some simply prefer the pace and cultural amenities of city life. Small towns aren’t for everyone, after all.

But for others, as this series suggests, it’s not such an easy call. Rural life offers something valuable – roots, family ties, perhaps open spaces – that they would rather not give up.

Three years ago, my wife and I, along with our young son, left our city jobs and returned to my rural hometown so that I could teach at a small college and she could work as a pastor at a Lutheran church.

I had lived in the Twin Cities for a decade-and-a-half, so the time away gave me a fresh perspective on what small towns have to offer in the 21st century – and what they don’t.

Here’s how it looks from my view:

A sense of place
The late Paul Gruchow, one of rural Minnesota’s finest writers, had a lot to say about the lost centrality of place – what we might think of generally as community – in American lives.

“We could teach our children rural history and rural culture,” he once wrote in offering ideas for reversing the decline of small towns. “We could introduce them to the artists of the countryside. …We could celebrate and practice the distinctiveness of rural culture rather than settling for the mass culture of the TV screen and Wal-Mart.”

I have always valued a sense of place. For me, the churches scattered throughout town, the local newspaper, the college, the cafes and barber shops, the old neighborhoods, the amateur sports and the people – white collar and blue, natives and new immigrants – represent a tangible place with its own character.

Sure, modern life has made the world smaller (think email, Twitter and Facebook) and more alike (think Perkins Restaurant and, yes, Wal-Mart), chipping away at those things that make small towns unique. But enough of that local flavor exists to separate small towns from suburban conformity or big-city anonymity.

In many ways, the idea of place – in a world of constant change, mobility and striving – is an important element of identity.

Keeping it simple
When I moved from the Twin Cities back to rural Minnesota, the daily commute to my job on most days dropped from about 30 minutes (one way) to roughly six minutes (which includes the walk from my car to my office). So, unless I am teaching a class in another town, I spend about 10 minutes each day in my car getting to and from work. Not bad.

Getting to and from the barber shop or the grocery store or the baseball stadium can all be done within a similar time frame. Ditto for a trip to my brother’s cabin to enjoy an afternoon at the lake.

Yes, when it comes to small-town life, there’s no doubt about this: The ease of getting around and the freedom it affords can rarely be matched in a large city.

Family and civic life
That simplicity translates into time: time for my wife and son; time for running errands; time for getting together with friends or extended family; time for – well, anything but sitting in traffic or traveling far distances for everyday tasks.

It also can encourage civic involvement (though leaving journalism hours behind for the regular hours of a teacher have helped in that regard, too). In my case, that has meant volunteering at church, attending high-school and college sporting events, working on a political campaign and reporting and writing about rural life for this publication.

In other words, living simply doesn’t have to mean quiet or boring. It can mean quite the opposite, actually: rich and interesting.

And yet…
It would be easy to romanticize small-town life. The novelist Sinclair Lewis – who grew up 40 miles up the road from here – refused to do so, noting that the nice and tidy Minnesota hamlet of his youth could also be a bit dull and isolating.

It’s a fair critique even today.

One major factor is the lack of choice – in restaurants, movies, bars, bookstores, clothing stores, etc. That’s a drawback in a world increasingly driven by advertising, pop culture and the exalted status of the consumer.

It also means that social networks are more important than ever for filling in those gaps in “things to do” – especially during the long and cold winter months. That’s not a problem for people who have lived in small towns for years and have the benefit of old friendships or family ties; it can be a challenge for new residents or transplants from other towns.

Jobs, jobs, jobs
That scarcity of choice can be true of jobs, too. While a lot of professionals thrive in our small towns – they all need doctors, lawyers, accountants and teachers, after all – the trades, food processing and agricultural work still dominate the landscape.

Not that there aren’t other opportunities. In Willmar, for instance, the MinnWest Technology Campus is now home to several high-tech businesses, as well as a new University of Minnesota research branch. There are other such examples in rural areas.

On the other hand, slow Internet access has been cited as a reason that some small regions, such as Lac qui Parle County west of here, continue to lose jobs and population. So there is a lot of work to be done.

It’s all enough to make a young person think twice about whether to stick around.

Stuart Lourey, 17, a student at East Central High School in Finlayson who plans to attend a liberal arts college, summed up that ambivalence in an interview with MinnPost:

“To be honest, I’m not sure if I’ll return when college is over,” he said. “In a way I can’t imagine living anywhere else. Maybe this is because I haven’t lived anywhere else. I plan to travel and live many different places and eventually learn that my hometown is in fact the best place on earth.”

I hope Stuart will return. Minnesota’s small towns need people like him. As for those who decide to leave for good: more power to them. I just hope they do so because they want to – not because they feel they must.

Gregg Aamot is a former newsman for The Associated Press and the author of “The New Minnesotans: Stories of Immigrants and Refugees.” He is a journalism and English instructor at Ridgewater College and Southwest Minnesota State University, and a freelance contributor to MinnPost.