News
Rural Minnesota
This project is made possible by a grant from the Otto Bremer Foundation.
July 8, 2011

Madeline Frick was born in tiny Ranier, but grew up in Grand Rapids where, at 21, she’s in the middle of her second summer internship with KAXE, Northern Community Radio. She has one more year as a media and cultural studies major at St. Olaf College in Northfield. Frick got in touch with us through our online form (Are you under 25 and living in Minnesota? We have some questions for you) and I followed up with a phone interview.

We talked about the dearth of entertainment opportunities for young people, the importance of community radio, and what it’s like to be a young woman in a city where leadership roles are filled almost exclusively by older men.

MinnPost: Working in radio is a rare opportunity for young people in rural Minnesota, even in larger cities like Grand Rapids. This is your second summer stint with KAXE, what do you do there?

Madeline Frick: The first time you just try to learn everything you can. I listened to a lot of music and sat in on a lot of shows, and at the end of it I did an interview with one of my favorite bands out of the Twin Cities. 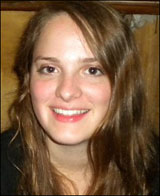 MP: Who was that?

MF: This year it’s really up to me. We just launched a new website, and I worked on that. I’ll be sitting in for some hosts.

MP: Are there many people your age working in community radio?

MF: I went to the National Federation of Community Broadcasters conference in the Twin Cities last year and I felt like I was the only one there who was my age. I was 20 then.

At our station, the next youngest person is 28 or 29, and we have quite a few people working here who are in their 50s or 60s. There is this tug between the younger generation and the older folks who want to listen to their folk or blues. The younger people are looking for something like The Current in the Twin Cities.

Something I think this town misses a lot is bands coming through. It’s pretty easy to get here from the Twin Cities and a lot of bands go to Duluth, but there’s nobody to pay them to come here.

Entertainment in town is not geared towards my generation. I’ve never heard of the bands that come to town, or I have heard of them because my parents remember them from when they were young.

We have this place called The Ground Floor, but it has a reputation of hard rock and noise rock — lots of cymbals and drums. I just want someone who is young and can play the guitar or something, you know?

MP: What drew you to radio?

MF: I like music. I suppose that’s why I got into it. In high school I didn’t have a working CD player in my car so I listened to a lot of radio and grew to love it. I love broadcasting what I like. I like letting people know what’s going on in their community.

MP: Very few cities or towns in Minnesota have something like KAXE. What does it bring to the community?

MF: It gives a community in the first place. People are always calling in about lost dogs; we get calls about somebody found a ladder or a fishing box on Highway 61. Community radio has identity. You could listen to satellite radio anywhere, but you don’t learn anything about your hometown. That’s one of the reasons radio is surviving, because people want to know about their community.

You’ll see the station’s green bumper stickers all over Grand Rapids; the station has been here since 1976.

MP: Are you going to stick with radio after college?

MF: I don’t know if I’ll go into radio after I graduate. I’ve got the skills. This job at KAXE is more than I can ever hope for as someone who is just 21. I’ve got a lot of work experience because of it.

I’m trying to get an internship in Los Angeles doing music supervision, where you select music for movies and television.

MP: With your interests and experience, is there a place for you in Grand Rapids other than KAXE?

MF: For music supervision specifically, I tried to get an internship in Minneapolis, but it is really hard. There are just a couple of companies and they weren’t taking on any interns. It wasn’t that the positions were filled, they just weren’t there. I really would have to go out to California or New York City to do that.

MP: There’s another limiting factor I wanted to ask you about. I went on the City of Grand Rapids website and looked at the Mayor, the City Council, and more than a dozen city departments. Only two women hold leadership positions — the library and finance directors. Otherwise it’s almost exclusively men in leadership positions. The women I found had either “administrative” or “secretary” in their title. How does this kind of gender disparity affect you?

MF: If I look around I feel like all of the people I see in power are old men. My mom grew up in the Twin Cities, and we’ve had many conversations about this — most recently when I took a class about men and masculinity in America. My mom said she noticed immediately how different it was when we moved here in 1993. The women still make lunch for the men. The men go to work, and the women do the housework. My mom works at the paper mill, and she’s one of the few women among many, many men.

MP: It sounds like you’ll probably be leaving Grand Rapids. One day, maybe 10 years down the road, you might be looking at a career change or a move. Would the gender dynamics in Grand Rapids be a factor for you?

MF: I never thought about that. I think Grand Rapids is a good place to grow up. I am totally fine with moving back here when I’m married — and I expect to have kids. But before that, I’m not too excited about it.

I try to be community-oriented. I can see myself going out for community boards. I don’t see it deterring me from going back. I’m willing to get involved. I was involved in something called Youth Leadership for Vital Communities, so I’ve done stuff like that before and I’ve tried to do that kind of stuff in college.

I’d just try to make some female friends and try to get us on some boards and change some things.

In Grand Rapids, community, gender — and a desire to see a good band