News
Rural Minnesota
This project is made possible by a grant from the Otto Bremer Foundation.
Aug. 10, 2011 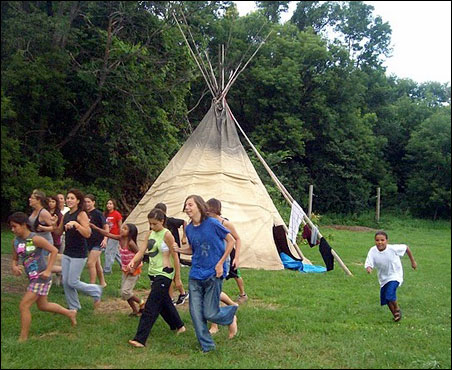 MORTON, Minn. – From a park picnic table a woman named Ruby watches her 12-year-old granddaughter, Shayla, answer a reporter’s questions. They are mostly one-word answers. Are you having fun learning the Dakota language? “Yes.” Is it hard? “No.” What’s the hardest part? “Sentences.”

Shayla is as tiny as her answers are short. She’s at the Birch Coulee County Park just outside of Morton to celebrate the end of a summer camp for Dakota youth learning the language. Look in any direction and there are clusters of kids playing language games. 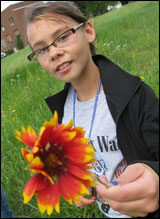 Her parents don’t speak the language. Ruby, her grandmother, doesn’t speak it either. “My grandparents raised me,” she says, “and Dakota is all they ever spoke. But then they took it away from us in the schools and we lost it. I’m proud of Shayla. Very proud.”

Of the roughly 4,000 Dakota people living in Minnesota, there are just eight who are known to be fluent in the Dakota language. Many, like Ruby, were deprived of the language in government-run boarding schools for American Indian youth. Dakota is a language on life support. Keeping vigil are the people who run the nonprofit Dakota Wicohan (wee-CHO-hahn), which translates to “Dakota way of life.” 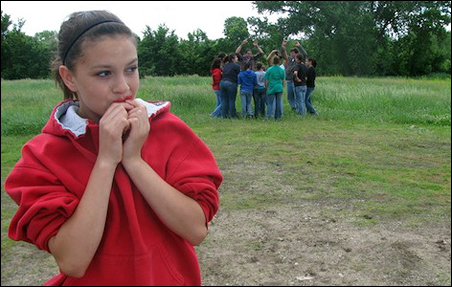 Courtesy of Dakota Wicohan
Young people at the summer camp with continue language study in Dakota Wicohan’s after-school programming in the fall.

The organization was formed to preserve and renew the language through a handful of learners. Eight years later there is a thriving community of learners and teachers, and talk of opening a learning center in Morton.

“I wish they had it like Dora,” says Ruby. “They have her on TV speaking Spanish. It’s too bad they don’t have Dakota like that.”

Nothing is impossible. That’s the kind of confidence Dakota Wicohon co-founder Teresa Peterson exudes. She is a believer in slow and steady growth. One relationship, then another, and another.

Peterson imagines early-childhood education in Dakota at the learning center. She is constantly taking an inventory of the community’s talents and thinking of how those talents might be put to use for the cause.

When she’s not at the work building or renewing community, she’s working her way toward a doctorate through the University of Minnesota Duluth’s Department of Education. 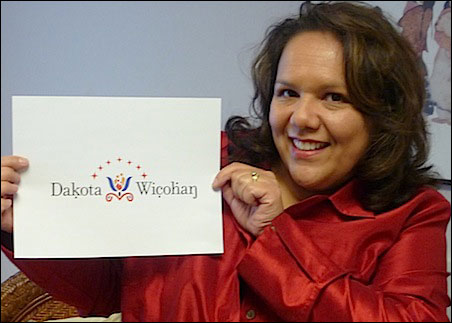 Birch Coulee is a potent symbol of Dakota history in Minnesota. It’s the site of a major battle in the Dakota War of 1862, which ended with a mass hanging of 38 Dakota warriors.

After the public execution, the United States declared all treaties with the Dakota people null and void. Reservations were abolished and the Dakota people expelled. Many were arrested and died in captivity; many more fled to Canada and South Dakota.  Some remained, among them Christian converts who were protected by missionaries.

Slowly, exiled Dakota made their way back to Minnesota. There are four federally recognized Dakota communities in Minnesota today: Prairie Island, Lower Sioux, Upper Sioux and Shakopee. There is also one Dakota community not recognized by the federal government: Mendota.

Kayla, another 12-year-old at the park about to enter the seventh grade, has been through the summer camp twice. She speaks of the horse riding she did and of learning how to name the parts of the horse in Dakota. She speaks of a favorite game, where they are shown a picture of a family and must write what they think that family is feeling in Dakota. She wants to study until she is fluent, and she’s a regular at Dakota Wicohon’s after-school sessions.

The camp has electrified her. She doesn’t tell me this, but she can’t hide it. Looking around me, it seems nobody can.

White Earth youth explains the Grass Dance, and talks of his life and heritage

Jingle Dress dancers describe their dance, their plans, and the role of the powwow in native culture

With the Dakota language on life support, a resurgence among native youth