News
Rural Minnesota
This project is made possible by a grant from the Otto Bremer Foundation.
Aug. 8, 2011 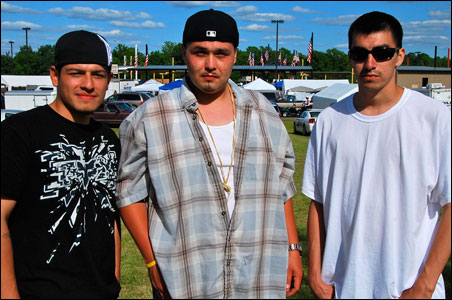 Gene Boshey was busy setting up chairs and equipment for his drum group in front of the announcer’s booth at the White Earth Reservation’s summer powwow. I introduced myself, told him about MinnPost’s rural youth project, and asked if he would talk with me on camera. He readily agreed and offered to ask a couple of his friends to join us. He said he welcomed the chance to tell people about himself and his cultural heritage.

After the afternoon ceremony and set of dances I recorded Boshey, along with Estevon Dominguez and Bradley Bloom, three of about a dozen members of the Smokey Hill Singers, an Anishinabe (also known as Ojibwe or Chippewa) drum group based in the White Earth Nation of northern Minnesota.

They, like the other young people I met at the powwow, spoke easily and with conviction about what it’s like to be Native American and what they’d like non-natives to know about their lives and their culture.

I interviewed 10 subjects, ranging in age from 13 to 26, for this week’s series of videos reports. The first four videos were all recorded at White Earth during the powwow. The final video features Anthony Morse, of Dakota heritage. I recorded him at the Lower Sioux Agency historic site near Morton, Minn.

These young people differ in many ways: age, gender, family background, experiences, education and future plans. But some themes and common core values emerged as they spoke to me, including an identification with native culture, the importance of family, a sense of the spiritual, and a desire to help improve the lives of native people.

While acknowledging that difficult issues confront Native American communities, including unemployment, graduation rates and alcohol and drug use, all of these young people expressed the feeling that those are problems in communities everywhere, as well as the hope that non-natives don’t use those issues to promote negative stereotypes of native people.

Most of them said they want to live on a reservation as adults, while some prefer a larger city. But they all want to maintain close contact with their native culture and believe that the solution to most of the problems facing native people and finding hope for the future is in persuading more young people to do just that.

They see their roles in the native community as important in several ways: 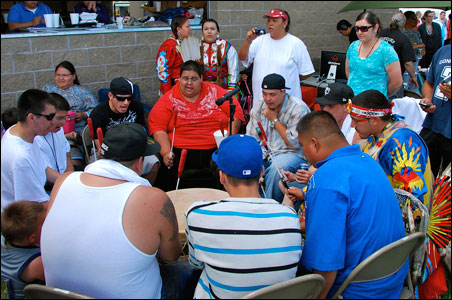 I met all of these young people just by walking up and introducing myself.  Each of them was friendly, welcoming and willing to participate. I thank them all.

It was a reminder to me that everyone – young or old – has a story to tell, everyone has something to say, and I always learn new things when I make the effort to listen. It was especially meaningful to me because while I’m a member of the White Earth Reservation, this was my first visit.

Here’s the lineup for my video reports this week about Native American youth in rural Minnesota.

Today: Smokey Hill Singers – Gene Boshey, Estevon Dominguez and Bradley Bloom, members of a drum group based in White Earth, talk about living on the reservation and life on the powwow trail.

Wednesday: Alex Mason, Callaway, Minnesota, a grass dancer and hockey player who will be a senior at Detroit Lakes High School this fall, tells about his dancing, his aspirations, and being a native student in a school off the reservation.

Friday: Anthony Morse, site manager and historic preservationist at the Lower Sioux Agency near Morton, Minnesota, talks about teaching history from a native perspective, identifying with his cultural heritage, and life on and near a Dakota reservation.

Related:
Carla Big Bear: Her life, like that of the Mille Lacs Band, is the story of a remarkable transition