News
Rural Minnesota
This project is made possible by a grant from the Otto Bremer Foundation.
Oct. 5, 2011 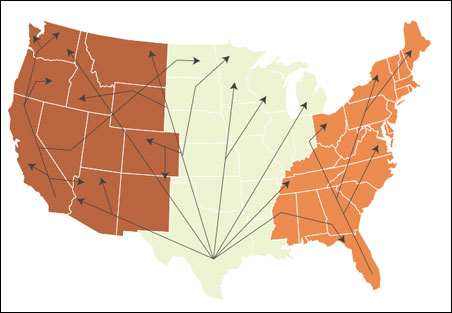 Chances are you are not particularly tuned into Minnesota’s agricultural calendar. You know the crops are planted sometime after the snow melts and harvested sometime before it starts falling again. Maybe you can name a few of the big Minnesota crops: sugar beets, corn, peas and the rest.

For many thousands of migrant and seasonal workers in Minnesota, knowing the state’s agricultural clock and quirks is a living. They drive up from Texas — there is a beaten path from the border state’s Southern Valley towns to our state’s farm and processing towns.

According to one estimate, produce grown in the United States is 85 percent picked by hand. Nationwide, there are more than 2 million farmworkers, according to the U.S. Department of Labor, which also ranks farm work the second-lowest-paid job in the nation.

Often, migrant workers travel as families, even when the family includes young children.

In Minnesota, a Head Start program for migrant children has been running statewide since 1970, operated by the Tri-Valley Opportunity Council (TVOC) in Crookston. There are 13 Migrant Head Start centers in the state today, each of them located where populations of migrant workers are most dense. According to TVOC, these centers serve around 1,000 students every year.

Cally Ingebritson, 28, supervises a team of recruiters who are responsible for finding new migrant families and enrolling their children into the Migrant Head Start program. Ingebritson spoke to MinnPost about the children and their families.

MinnPost: You’ve been doing this work for two years. What surprised you when you first came on?

Cally Ingebritson: The biggest surprise when I started this work was just how many of these migrant families existed. They are so vital and yet so invisible.

As someone born and raised close to the Twin Cities, I didn’t know there were people who moved temporarily to work in agriculture, or that there was such a need for agricultural workers. I just had this idea of the family farm where it’s self-sustaining. Certainly there are lots of farmers out there who can manage their own crops, but to be able to provide food that goes across the country, there is more labor needed.

MP: Many of the workers travel up from Texas to work, and the vast majority of the migrants from Texas are Hispanic. How many of them are immigrants?

Then there are people who live year-round in Minnesota and do the same work as the migrant laborers. We call them seasonal workers — they work seasonally in agriculture. Maybe who have migrated in the past, but they’ve stopped migrating. We’re able to serve those families as well. Our whole program is set up to serve families who work primarily in agriculture.

What happens is people specialize — they get experience with different types of crops, and so when they move to work they return constantly to harness these skills. Migrant families will work in multiple crops and move back and forth sometimes between places where they’re able to do familiar work.

I’m from Minnesota and I’ve traveled to towns that I’ve never heard of before, and these migrants have been going there for years, sometimes decades. Many families just drive from Texas specifically to Bruton or Montgomery or Olivia — very specific places where they know they have work.

Other families come to look for work, but many have longstanding relationships with farmers, or they are contracted to work canning companies or processing plants, who send their recruiters down to Texas to find workers and have them sign a contract right there.

MP: What about housing?

CI: Many are looking to rent a place while they’re here, but many landlords don’t want to sign a lease for anything that’s less than a year or six months. Of course, not all of our families even know if they’re going to be here for six months.

There are migrant camps, offered by some of the larger employers. They are basically temporary housing located close to the work site. At some of them the conditions are OK, and truthfully, some of them are really, really bad.

Picture small, individual buildings surrounding a sort of central patio area. There are shared bathrooms and shared laundry facilities. There is a play area for the kids. Inside the housing, it’s almost all open.

I visited one of these camps recently, in Owatanna. It was drab and a bit harsh. It was all cinderblocks. Everything was gray. That one, a co-worker tells me, used to be part of a prison. Now the families who are literally feeding us everyday are housed there.

MP: You supervise a team of recruiters. What exactly do they do?

CI: The staff that I supervise is primarily responsible for two things. They are recruiters who go out into the community and try to find migrant families where they are living or working. Once a family is enrolled, they try to make sure all the family’s basic needs are taken care of and connect them to other resources.

Some of the staff recruit in the areas immediately surrounding the schools where we’re running Migrant Head Start. At the beginning of the season, typically in spring, we draft a plan based on what we know is happening for families who are working in agriculture. That’s what happens close to the centers.

In areas that are a bit further away from where the actual Migrant Head Start centers are located, we have regional recruiters. Some of them also work for the Department of Education for Minnesota. For Head Start, we serve children from birth to kindergarten age, but for migrant students who are older than that — for K-12 and even a little bit beyond that as well — the state of Minnesota offers services.

A lot of families will come and drive straight to us. I have literally met families who drove straight from Texas right to our school because they knew there was registration that day.

MP: So what happens to the kids who aren’t enrolled in your program or something like it?

CI: If they aren’t at Migrant Head Start, I think a lot of children stay home maybe with an older sibling. We heard once of a small child kept in a truck on the side of the road when it was like 90 degrees.

Every day, especially on the hot days, that’s in my mind. That’s why we need to do what we’re doing — to get those kids in a safe place.

These kids have dreams; they have goals for themselves once they get out of school: They want to be doctors, lawyers, teachers or basketball players like any other kid you know. We have a responsibility to provide the opportunities for kids to reach their goals.

Vital and invisible: Minnesota’s migrant workers and their children