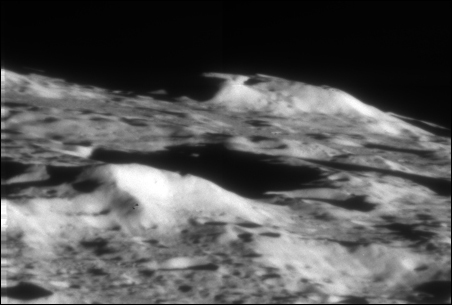 Courtesy of Palomar Observatory CalTech
An image of the moon following Friday’s impact.

The punch NASA threw at the moon last week stirred a fair amount of romantic outrage. But did it stir up any answers to the question at issue: Is there evidence of water on the moon?

After the two-ton hunk of metal hit its mark on a crater near the moon’s south pole  Friday, Richard Kerr noted in ScienceNOW Daily News that no one “could see the much-ballyhooed spray of dust and debris that they had been told to look for.” Impact modelers had simulated a slam-down causing a spew of debris – hopefully of soil containing water. But something as simple as a boulder on the impact site could have thrown off the expected result, Kerr said.

Still, there was optimism, grounded in enticing spectroscopic changes detected around the impact site. So the answer to the water question may lie in chemical analysis of light waves upon impact. Getting it will take additional weeks or months of data combing.