News
Scientific Agenda
Oct. 15, 2009
This div will be replaced

WASHINGTON, D.C. — Team members from the University of Minnesota were tense as they prepared their 565 square foot solar home for a visit by jurors from the engineering and lighting judging panels. Experts in their respective fields, the jurors’ visit would determine the team’s score for the aesthetics and functionality aspects of their design that cannot be properly evaluated by measurements alone.

The judges would also be taking comfort zone and appliance measurements, and the students were worried about every operational detail inside their $501,000 house.

The Minnesota team was in 7th place out of the 20 teams that built entirely solar-powered homes on the National Mall in downtown Washington as part of the Department of Energy’s 2009 Solar Decathlon competition.

They wanted to move up in the rankings, but there were so many things to worry about.

Was there enough solar thermal hot water for the big and small dishwashers in the kitchen and the clothes washer in a cabinet next to the small bathroom? Was the temperature in the house just right? What about the humidity? Exactly how much power would the appliances, along with the lights — mostly LEDs — draw from the photovoltaic cells that covered the roof and south-facing wall?

The team calls their structure the ICON solar house because it resembles the familiar gabled roof design of the typical American family home. “We’ve skewed [the roof] to the north for a larger south-facing surface for [the] solar cells,” said Shona Mosites, a senior studying interior design at the University of Minnesota. “And we’ve build it specifically for Minnesota.”

Like all of the houses in the competition, the Minnesota house is compact — about the size of a large house trailer. It is extremely energy efficient, producing more electricity during the day than it uses and feeding the excess into the regional power grid. At night, when the sun is down, the house draws from the grid, but less than it feeds into the system during the day.

And like all of the other houses, the ICON house makes extensive use of green materials.

“The sliding panels are made of recycled material, and the maple flooring is two-thirds reclaimed wood,” Mosites said.

But as exotic as the house feels, it is “all off the shelf,” according to Craig Hohensee, a recent engineering graduate from the U of M who served as the project’s construction manager. “I ordered all of the wood from Home Depot,” he said. “It wouldn’t be a problem for someone to build a home like this.”

The details of the ICON home and a virtual tour of their design can be seen on the project’s website.

When the judges announced the results of their measurements after visiting the ICON house, the Minnesota team had won the appliance competition and vaulted into 5th place.

At the other end of the Mall, the team from the University of Wisconsin-Milwaukee was struggling. The team was in last place, and were struggling to get the house’s sliding doors to move smoothly on their tracks. Their house, valued at $485,000, had tabletops made out of pressed paper and cashew shells and the ability to warm up just from the heat of the people inside.

But its last-place standing reflected a 3-inch problem in the design.

“The west end of the house was 3 inches too tall to go through Indiana [on the transport trailer],” said Eric Davis, the project’s chief engineer. “So we had to go down through Illinois, then cross Kentucky.”

There was another height regulation problem when they got to the edge of Washington, and it took another 20 hours to finally get their structure to the National Mall. While the other teams were fine tuning their home’s systems, the Wisconsin team was still wearing hard hats and putting their house together.

“We missed the metering contest, so our score is down,” Davis said.

The houses that make up the high-tech Solar Village are mostly from universities, shipped in multiple pieces from around the world. Germany, Spain and two teams from consortiums of Canadian universities also have entries in the competition. And the event is drawing crowds, with long lines of people waiting to tour the houses.

The energy produced by these small structures, each limited to 800 square feet, powers all of the lighting, appliances and air conditioning within. And on sunny days, when the houses produce more electricity than is needed, they pump the extra energy directly into the regional electrical grid that powers the metro area.

The German team’s house often gives back twice as much energy as it uses — enough in one day to light 400 incandescent light bulbs for one hour.

‘I’m fundamentally cheap’
Secretary of Energy Steven Chu helped to kick-off the event on Oct. 8 by describing his own home-improvement experiences while working to make his home more energy efficient. “I started doing this long before I knew about climate change. And I have to confess the only reason I was doing that is because I’m fundamentally cheap,” he said.

Chu said that during his time at Lawrence Berkeley National Laboratory in California he became convinced that houses could be made 75 or 80 percent more efficient in terms of energy usage — before adding any solar panels. He also announced an additional $87 million in DOE funding to further the solar research on display in the homes.

Several of the houses are smart phone-enabled — the interior lighting and temperature can be changed remotely with an iPhone application. Others adjust interior conditions automatically, using sensors that monitor time and weather data to tint electrochemical windows and dim light levels. 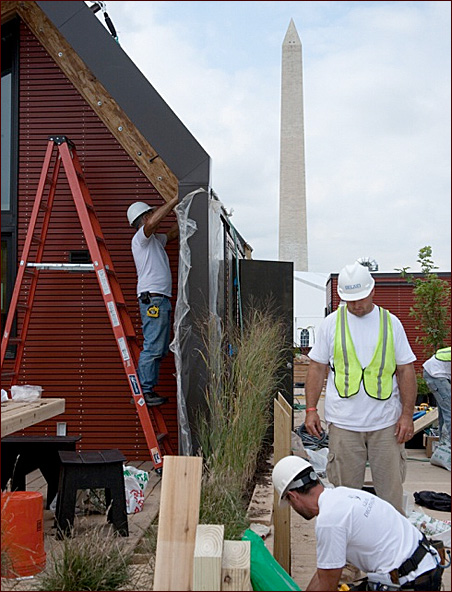 Jim Tetro Photography | Courtesy DOE
The team from the University of Minnesota works to erect their entry for the 2009 Solar Decathlon.

But the point of the contest isn’t just to showcase new technology. Each team is scored in ten different categories that include the engineering and lighting design categories that had the Minnesota students so nervous. The buildings must provide all the basics of daily life. Several times a day, they must pump out 15 gallons of hot water that could be used for showering. Solar energy also powers a host of appliances that include dishwashers, clothes washers, refrigerators and televisions.

Teams that score well overall are those that focus not only on the individual pieces of the house, but on how the pieces fit together to create a the houses focus on a systems approach — designing a house not piece by piece, but as a giant system.

“As we went through the 70s and the 80s, we had terribly unreliable systems that gave solar a black eye,” said Richard King, director of the Solar Decathlon. “As we move into the future, to do it right we have to start from the ground up and make the whole house a system, so it’s all integrated.”

King, who launched the first Solar Decathlon in 2002, said that the contest is designed not to be too restrictive, to give students a blank page and see what they come up with. This promotes a wide variety of engineering approaches and aesthetic designs, he said.

The team from Iowa State University in Ames built a house designed specifically to appeal to older, retired couples. It was the only structure to be certified under the Americans with Disabilities Act, and the unfinished white maple exterior is intended to feel comfortable and familiar.

“A lot of people have been saying that they could see themselves eating breakfast in this corner, that the house feels livable,” said Melissa Sander of Iowa State University as she guided visitors through the house. Their house placed 3rd in market viability.

The average cost of a home on this solar-powered block is $490,000, but teams can spend as much on their project as they can afford. The cheapest house Rice University’s ZEROW House — is intended for lower-income inner-city neighborhoods and is built with walls of galvanized metal that could retail for $140,000. The customized electronics and solar panels in the North House help contribute to a cost upwards of $800,000, a sum that Team Ontario/British Columbia from the University of Waterloo, Ryerson University and Simon Fraser University aim to target at young urban professionals.

Team California’s house, — a collaboration between Silicon Valley’s Santa Clara University and the Bay Area’s California College of the Arts — was in 1st place throughout the first several days of the competition and featured a design utilizing bamboo as an alternative building material for its rafters, while Team Spain — from the Polytechnic University of Madrid — had constructed their walls from the solar panels themselevs.

Many of the design elements have led to patents, and new prototypes from several companies were on display — from a heat-absorbing lining made of the same materials as insulating pizza boxes by Phase Change Energy Solutions of Asheboro, N.C., to a solar water heater that creates miniature hot geysers and collects the overflow by Sunnovations in Reston, Va.

On Tuesday, scores of middle and high school students from across the metro area crowded through the solar houses as their teachers held up flags and otherwise tried to keep them in order. As two middle-school boys walked between the houses, one turned to the other and said, “Wouldn’t it be so awesome if one of these had a solar powered hot tub.”

But that idea has already come and gone.

A house entered in the 2007 competition by the University of Texas in Austin actually included a working solar-powered hot tub, but the designs featured in this year’s competition were all evidently spa-free.

Solar Decathlon event: U team in the middle of heated competition

By Jim Dawson and Devin Powell