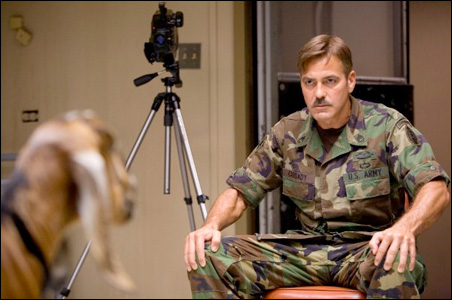 BBC Films
George Clooney in a scene from the new motion picture “The Men Who Stare at Goats.”

In the new movie “The Men Who Stare at Goats,” George Clooney plays a former member of a secret sect of soldiers trained by the U.S. military to deploy a host of paranormal weapons against the enemy. One fabled weapon is the ability to kill by psychokinesis: stare at a goat and make its heart stop.

The movie takes liberties in the name of comedy, but the program it’s based on is real, Greg Miller reports in ScienceInsider, an online news ticker affiliated with the American Association for the Advancement of Science.

During the Cold War, the U.S. military became convinced it was losing the “mind race” against the Soviet Union. And as recently as the late 1980s it was investigating a range of paranormal phenomenon and their potential uses in espionage and combat, Jonathan Moreno told Miller. Moreno is a philosopher at the University of Pennsylvania who studies military applications of cognitive science.

Further, Miller cites a 1988 National Research Council report  on enhancing human performance. It says that some military decision-makers believed that extrasensory perception (“if real and controllable”) could prove valuable for intelligence gathering, while psychokinesis could find an even wider range of uses, from jamming enemy computers or weapons, planting thoughts in individuals without their knowledge, or even killing enemies at a distance.

The report says: “One suggested application is a conception of the ‘First Earth Battalion,’ made up of ‘warrior monks,’ who will have mastered almost all the techniques under consideration by the committee, including the use of ESP, leaving their bodies at will, levitating, psychic healing, and walking through walls.” This is the elite squad Clooney’s character belonged to, Miller says.

Suggested? Yes. But whether actual research ever extended as far as trying to kill anything by psychokinesis is doubtful. Wired reported on Friday that one of its staffers had interviewed John B. Alexander, a retired U.S. Army colonel who served as a Special Forces commander in Vietnam and spent decades promoting the use of psychics for national security. Alexander is featured in the non-fiction book on which the new movie is based.

“There’s plenty of material in the movie which sticks quite close to the truth — though reality is a bit more complicated,” Wired reported.

The closest this may have come in reality was an experiment with “dim mak” or death touch, a martial arts skill which involves a light strike designed to kill by interrupting the flow of chi.

Fiction is what it is. But the truth still is pretty strange.

Can you really stare at a goat and make its heart stop?