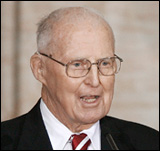 Borlaug died last year, but his papers soon will be more accessible than ever under a plan for the University of Minnesota Libraries to digitize them.

Borlaug, an Iowa native, earned his bachelor’s, master’s and doctorate degrees at the U of M. Although Texas eventually became home, he returned often to participate in programs at the St. Paul campus where a building bears his name.

The University Archives hold 58 boxes of material to be digitized, including notebooks from five decades of field research. In pocket-sized books, Borlaug documented his travel and field work in Mexico, South America, Africa, the Middle East, South and South East Asia and Eastern Europe.

Other items in the collection include Borlaug’s correspondence with colleagues, mentors and world leaders; talks and writings; multiple drafts of his Nobel acceptance speech; and over 7,500 photographs from the late 1940s through 2000. Also included will be papers from some of Borlaug’s contemporaries — such as correspondence and photographs from Borlaug’s mentor, E. C. Stakman, who was a renowned plant pathologist in his own right.

The project  — supported by a $27,667 Minnesota Historical and Cultural Grant that was funded through the state’s new Clean Water, Land, and Legacy Amendment — is to be completed by May 2011.

Borlaug papers to be digitized and more accessible