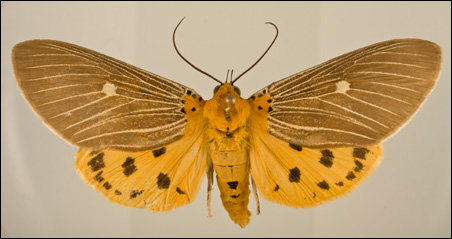 University of Minnesota plant biologist George Weiblen and an international research team focused on moth and butterfly species in Papua New Guinea. In one case, they were able to use “DNA barcodes” to show that a tiny moth, Asota caricae, had crossed thousands of miles of Pacific Ocean.

Their findings were published in a recent online edition of the Proceedings of the National Academy of Sciences.

This isn’t the first use of DNA barcoding. Short segments of genetic material have been used – for example, to identify plants from leaves alone without the benefit of fruit or flowers. Scientists also have used the codes to determine exactly what’s in the stomachs of animals under study.

Now it is helping to provide information about the habits and history of species, Weiblen said in a statement about the findings. The applications he and his team have polished are of particular interest in Papua New Guinea, a country slightly larger in size than California with an insect diversity more than three times that of the United States.

Weiblen, who also is a curator of plants at the Bell Museum, has studied insect diversity in Papua New Guinea’s forests for 17 years. His collaborators on this study were from the Smithsonian Institution, the University of Guelph in Ontario, Canada and the University of South Bohemia, Czech Republic, as well as the University of Minnesota.

Even beyond Papua New Guinea, DNA barcoding can play an important role in studying the arrival of invasive species, such as the emerald ash borer which has recently been introduced in the United States from Asia.

“We need to understand the genetic history of invasion in order to combat the pests that threaten trees and crops,” Weiblen said. “DNA barcoding can pinpoint the geographic source of an invading species and measure the distances over which pest species can travel.”