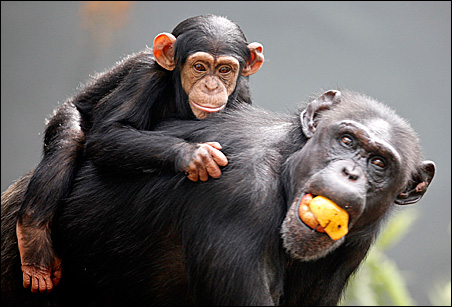 REUTERS/Daniel Munoz
There is no question that chimp mothers and their offspring bond tightly.

Details of the study are heart wrenching: A chimpanzee called Jire carried the corpse of her infant for some 27 days after the small chimp died in the forests surrounding Bossou, Guinea. She groomed the little body, cuddled it in her nests and objected to any separation from it.

The poignant story is not unique. A research team led by Dora Biro of Oxford University in England reports in Current Biology observing two other chimp mothers stubbornly carrying the remains of their lifeless offspring for up to 68 days — even while the bodies stank with decay and eventually mummified.

Were these animals — our close evolutionary cousins — grieving in human fashion? That is the fascinating question raised by this report and one other in the same journal.

Professor Michael Wilson of the University of Minnesota is among experts who caution us not to anthropomorphize about other species, not to project our own natures on them. Wilson is one of several U of M scientists who have studied chimps extensively in Tanzania’s Gombe National Park, where primatologist Jane Goodall began documenting chimp behavior in the 1960s.

Too short vs. too long
Wilson was not part of the Oxford research team reporting these latest observations of chimp mothers. But the findings didn’t surprise him.

“I’ve spent much more of my time than I would like watching dead and dying chimpanzees, and the responses of mothers and others to them,” Wilson told MinnPost. “It’s fairly common for chimpanzees, as well as various other primates, including baboons and rhesus monkeys, to carry their infants long after they’ve died.”

So the behavior is well established. What remains in doubt is the question of what it means. Are these caring mothers expressing grief as we understand it?

There could be other explanations, Wilson said. Reproduction is a powerful evolutionary force for survival of a species. That force can extend to care of the offspring at least until they are able to reproduce on their own.

In that context, the chimp mothers’ behavior could be seen as “adaptive,” Wilson said.

“It’s likely a more costly mistake not to carry an ailing infant long enough (because) a sick baby might, after all, get better,” he said, “than to carry it for too long … after it’s dead or even mummified.

Mother-offspring bond
There is no question that chimp mothers and their offspring bond tightly, perhaps for similar reasons.

“Orphans are, as you might imagine, deeply affected by the loss of their mother, responding much as we would expect grieving children to respond,” Wilson said. “Jane Goodall vividly described how when old Flo died, her orphaned son Flint was listless and despondent and died soon after.”

Here is a version of the account from the website of the Jane Goodall Institute of Canada:

“Flo gave birth to at least five offspring: Faben, Figan, Fifi, Flint, and Flame. She was a wonderful, supportive, affectionate and playful mother to the first three. But she looked very old when the time came to wean young Flint and she had not yet fully succeeded in weaning him when she gave birth to Flame.

“When Flame died at the age of six months, Flo stopped even trying to push Flint to independence. Flint became abnormally dependent on his old mother and when Flo died in 1972, he was unable to cope without her. He stopped eating and interacting with others and showed signs of clinical depression.

“Soon thereafter, Flint’s immune system became too weak to keep him alive. He died at the age of eight and a half, within one month of losing his mother.”

Elusive in death
As the account says, Flint’s persistent dependence on his mother was “abnormal.”

A “normal” adult chimp’s response to the death of another adult is an elusive research subject because older chimpanzees typically die alone, Wilson said.

That leads to the second and related report in Current Biology.

It tells the story of Pansy, a chimp of about 50 years old who lived at Blair Drummond Safari & Adventure Park in Scotland. Chimps in the park summer on an island and then are moved to heated indoor quarters for the winters.

In November 2008, Pansy became increasingly lethargic. The move indoors apparently was too much for her. She ate, then slumped to the floor.

Here’s where the story gets interesting. Three other adults — including Pansy’s 20-year-old daughter, Rosie — began grooming her, making nests for her and sleeping near her.

As the days wore on, Pansy clearly was dying. When her breathing became erratic and labored, the head keeper decided to leave her alone with the other chimps.

The intimate ensuing scene was captured on two overhead video cameras. You can watch one here.

Death ritual?
For me the actions on the videos weren’t clear. So I’m going to rely on the interpretations of the research team, which was led by psychologist James Anderson of the University of Stirling. The team reported that Rosie rubbed her mother’s torso while another female groomed her arm and stroked her hand. After Pansy drew her last breaths, the chimps seemed to inspect her body and test for signs of life.

Then a male chimp charged her corpse and pounded her torso. (He may have been tempting to rouse her or else expressing frustration over her death, the researchers wrote.)

Finally, Rosie sat through the night next to her mother’s body.

The next day, the three attending chimps stood by while keepers removed Pansy’s corpse. Here’s how the researchers describe their behavior: “They watched silently as two keepers lowered Pansy from the platform, carried her into the exit corridor, placed her in a body bag, and loaded her into a vehicle that was then driven away. They remained subdued the following day as the night area was cleaned and disinfected, and new straw provided.”

Later, the chimps seemed to be wary of the death chamber.

After keepers opened doors to the area where Pansy had died, Rosie and the other female entered hesitantly, the researchers said. But the female chimps scurried away after the male chimp sounded alarm calls. And all chimps refused to sleep in the area, which was a normal night nesting spot.

“For five consecutive nights no chimpanzee nested on the platform where Pansy died, yet this platform had been used for nesting on every evening of the 29-night study. Rosie was the first to resume nesting there,” the researchers wrote.

The researchers don’t go so far as to say that chimps, like humans, are aware of their own mortality. But the ritual at Pansy’s death nest prompted them to say, “We propose that chimpanzees’ awareness of death has been underestimated.”

Dolphins and elephants too
Questions of whether compassion, grief and awareness of death are unique to humans long have puzzled scientists.

Dolphins also have been observed showing empathy for others and for humans too.

But “most animals show few signs of being disturbed when one of their fellows dies,” Michael Balter wrote in reporting this latest research for Science magazine.

“For example, red deer used to hearing rifle shots will remain relatively impassive when another deer is shot dead by a hunter,” he wrote.

Beyond dolphins, a notable exception is the African elephant. They often have been observed engaging in empathetic and caring behavior toward dying members of their species, Balter wrote.

In one observation in Kenya — vividly described here — an elderly female elephant was helped to her feet by the other elephants as she weakened on the day before her death. After she died, her own family and four others visited her corpse, apparently keeping vigil.

The team reporting the research in Kenya was connected to the organization Save the Elephants.

The mounting evidence that at least some other animals may possess traits that are considered deeply human — compassion for one another, along with awareness of mortality and even grief — calls for new ethical considerations of our relationship to the animals, the researchers concluded.

“Ethics requires us humans to treat animals, especially those who are sentient, as we would like to be treated ourselves,” they wrote.

At a minimum, the latest chimpanzee research suggests that animals in captivity should be given freedom to practice their own natural rituals related to dying and death.

Chimps clearly react to offsprings’ deaths; are they grieving?