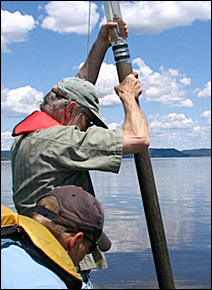 Cleanliness may be hurting us — at least in the way most of us achieve cleanliness with commercial hand soaps, deodorants and household cleaning liquids.

A new University of Minnesota study found that certain types of dioxins derived from many popular cleaning agents are showing up increasingly in the sediments of the Mississippi River as it flows through Southeastern Minnesota.

Dioxins can be highly toxic, [PDF] causing liver disease, birth defects and other disorders, according to the National Research Council. They can persist in soil and sediment for decades and also in the flesh of fish and other animals. One notorious and devastating application of a dioxin was the U.S. spraying of the herbicide Agent Orange during the Vietnam War.

U of M researchers say that the toxicity of dioxins generated by the compound they studied is “not well understood.” Also unknown is the extent to which they have spread broadly in the environment. The study was spearheaded by Jeff Buth, a recent Ph.D. graduate in chemistry, with collaboration from other scientists at the U of M, the Science Museum of Minnesota, Virginia Tech and Pace Analytical of Minneapolis.

From deodorant to socks
The Minnesota research, reported online in the journal Environmental Science and Technology, focused on triclosan, an anti-bacterial and anti-fungal agent that was first added to commercial liquid hand soap in 1987.

By 2001 about 76 percent of commercial liquid hand soaps contained the compound, the researchers say. It also went into deodorants, shaving gels, cutting boards — even toys, work clothes and socks. We are so surrounded by the compound that it is found in the urine of 75 percent of the U.S. population, the Washington Post reported.

In April, the U.S. Food and Drug Administration announced it would take a fresh look at the safety of triclosan. Among the FDA’s concerns was whether the compound disrupts the body’s endocrine system as it regulates growth and development. Another worry is whether it gives bacteria better chances of resisting antibiotics.

European countries have banned or restricted use of the chemical, and some Congress members are calling for restrictions here too.

But Brian Sansoni of the Soap and Detergent Association, which represents the $30 billion U.S. cleaning products industry, told the Washington Post that concerns about triclosan are unfounded.

“These products and ingredients have been reviewed, regulated and researched for decades,” he said. “We believe the science strongly supports the safety and efficacy of these products. It’s more important than ever that consumers continue to have access to these products. It’s a time of increased threats from disease and germs.”

Environmental groups countered that the soap industry was taking advantage of consumer fears or infectious germs, especially last year during the H1N1 outbreak.

U of M scientists heightened concerns about triclosan when they published papers in 2003 and 2009 reporting that the compound generated a specific suite of four dioxins when it was exposed to sunlight.

In the current study, researchers examined sediment core samples from Lake Pepin, a popular boating area on the Mississippi River about 120 miles downstream from the Twin Cities.

About 96 percent of triclosan from consumer products is disposed of in residential drains, leading to large loads of the chemical in water entering wastewater treatment plants.

Some, but not all, triclosan is removed from contaminated water during the wastewater treatment process. And when treated wastewater is released to the environment, sunlight converts some of the triclosan and related compounds into dioxins.

The sediment cores from Lake Pepin, containing a record of pollutant accumulation in the lake for the past 50 years, were analyzed for triclosan, the four dioxins derived from triclosan, and the entire family of dioxin chemicals.

The good news from the findings was that levels from most dioxins have dropped by 73 to 90 percent over the last 30 years as public awareness spawned efforts to reduce them.

But meanwhile, the levels of the four dioxins derived from triclosan have risen by 200 to 300 percent, the research team reported.

Triclosan and the dioxins ended up in Lake Pepin sediments by sticking to organic particles in the river, which then sank when they reached the calmer waters of the lake, the researchers said.

“These four dioxins only come from triclosan. They didn’t exist in Lake Pepin before triclosan was introduced,” said U of M civil engineering professor William Arnold who led earlier discoveries of the dioxins and also supervised the current research.

“In the most current sediments, these triclosan-derived dioxins account for about 30 percent of the total dioxin mass,” Arnold said in a statement about the discovery.

What, exactly, the findings mean in terms of safety for humans and for the environment remains to be seen from more research and from the FDA review. But it does bring close to home the need for further research.