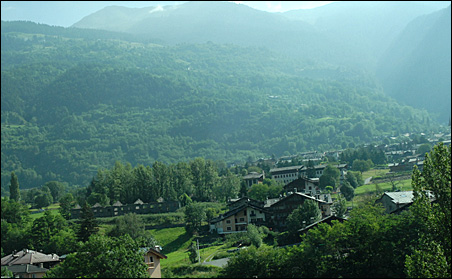 MinnPost photo by Jake Otto
Tiny villages nestle into each valley in the Italian Alps, under their local castle and church.

GENEVA, Switzerland — In Italy they like to eat late. Most people don’t even head out to the restaurants until about 9. And in Torino there are many of them, mostly spilling out onto the sidewalks. In the old town center, an area of winding streets and tall brick and stone buildings, it’s sometimes hard to tell what is restaurant and what is street – tables are placed out onto the pavement and cars wind between them. They seem to all merge into an outdoor party full of a pleasing mix of wood smoke from the grills, fresh and delicious seafood, Fiat exhaust and wine.

Which explains why this morning came especially early. We had to be at the old Fiat plant, now a huge shopping, hotel, and conference complex, at 6:45 a.m. to catch a bus to CERN — the European Organization for Nuclear Research. The Fiat plant is about a two mile walk from the hotel. It was still that sort of liquid cool before what you could just tell was going to be a hot summer morning.

We ducked into a patisseria along the way and grabbed a cappuccino and some pastries — and let me tell you, you have not lived until you’ve had a china cup full of Italian cappuccino and a still-warm pastry at 6:15 in the morning. You can’t get anything to go here — in fact Torino is the capital of the global Slow Food movement — a pastiche of aligned ideas and practices from extremely fresh, high quality local foods to a certain attitude about life that rejects fast, cheap and unmindful. But the service is quick nevertheless. This morning, we were in, out and happy in less than five minutes. Add that we got to drink and eat on china near the open door, not out of a paper cup and a wax bag, and you have to love it.

Crossing the Alps to CERN
The CERN trip is one of the last activities at ESOF — the Euroscience Open Forum. I am here to talk about U.S. science policy and politics, and how we organized Science Debate 2008 between Barack Obama and John McCain.  Several European countries have since copied the initiative, hoping to elevate science in the national dialog and in the minds of elected officials.  At least in the case of Barack Obama, it worked.

We’re taking a coach bus over and through the Italian, French and Swiss Alps to Geneva, Switzerland. CERN is famous to moviegoers as the home of the Large Hadron Collider – the most complex scientific instrument on the planet. In the movie “Angels and Demons” it was the source of the anti-matter the bad guys stole to try to end the world. In reality, you encounter antimatter all the time, but in subatomic particles that are almost immediately destroyed as they contact matter.

In fact, physics formulas suggest there should be roughly the same amount of matter as antimatter in the universe. The extreme rarity of antimatter today is a puzzle that scientists are trying to understand.

Another way you may have heard recently of the Large Hadron Collider was in media speculation and even lawsuits over worries that a small black hole created in theory by one experiment could grow and swallow the planet. (You can read CERN’s reassurances regarding that worry here.) This proves a point that I was invited to Europe to make: that when science is presented in ways that are relevant to people’s lives: i.e. through politics and ethics, they are deeply interested.

From brick barns to ubiquitous tobacco
On the road north into the Alps we see some of the interesting differences between Europe and the United States. The corn is tall here, just like at home, but the barns and silos are mostly brick, sometimes even combined with houses on the second floor, which draw heat from the animals below.

Another difference is how quickly the cities fall off into the countryside and farm fields. Europe grew up before the car, making cities much more compact. What we think of as typical suburban sprawl is nonexistent. Also, public transportation is common, fast and cheap — and the daily walk to and from the train station means most Europeans are svelte by America’s Shrek-like standards.

Of course, Italy is famous for its food — and I don’t mean the tomato paste stuff of cliché. Italy is surrounded on three sides by water and both seafood and meat as in carne are plentiful, fresh, delicious and cheap.

Add walking to the amazing food and you have a pretty healthy situation — which Europeans immediately compensate for by smoking like diesel engines. Tobbaccarias are everywhere and are also where you send the children to get other everyday necessities, like bus tickets.

Spiky mountains, tunnels, CERN
The bus climbs up into the Italian Alps, which are unlike anything in North America with the possible exception of Estes Park. Steep, spiky mountains like the Matterhorn are the norm. They stream with long waterfalls and the valleys rush with gray rivers. Tiny villages nestle into each valley under their local castle and church, and vineyards climb up mountain terraces behind. The buildings are most often roofed with large diamond-shaped slabs of raw gray slate that look like they’ve been in service for five hundred years, and probably have.

We climb higher and pass through the 11,611 meter-long (7.2 miles long) Mont Blanc tunnel. Coming out the other side, we are in France. The vista expands outward and upward. Gone are the vineyards and the slate-roofed houses. Here are wider valleys, and the broad-roofed Alpine chalets you have seen in photos. And here the mountains expand upward, too, another several hundred meters, into broad white icecaps that shine brilliantly in the midmorning sun.

These continue down through steep Alpine valleys and tunnel after tunnel through into the Swiss Alps and gradually fall off into the wide farm fields surrounding the South of Geneva.

CERN itself is not a new facility. Originally built in 1954, it was the first cooperative venture of its kind. Particle physicists working at CERN have produced many wonders over the years, including inventing the World Wide Web to help them share data at light speed with satellite research centers and universities across five continents.

What is new at CERN is the Large Hadron Collider. It accelerates protons to almost the speed of light, in circular beams, making about 11,000 revolutions per second as they race through a tunnel 100 meters (328 feet) under Switzerland and France, 27 kilometers (16.8 miles) in circumference.

Tomorrow, I’ll take you deep into the heart of the Large Hadron Collider and tell you what angels and demons I found there.