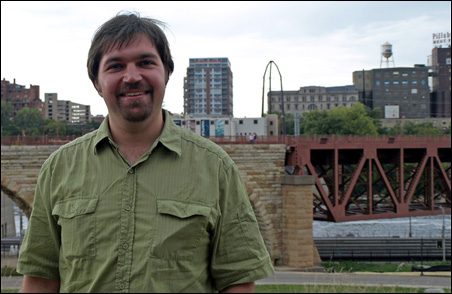 MinnPost photo by Sharon Schmickle
Matt Rota: “We really aren’t going to know the full impact for years to come.”

The Gulf of Mexico’s so-called dead zone swelled this summer to afflict one of the largest areas on record. Further, in a dramatic double-play disaster, it rubbed up against the massive BP oil spill.

Such are the problems confronting members of the Mississippi River Collaborative at their annual meeting in Minneapolis this week.

At this point, no one knows the full impact of the tandem disasters on life in the Gulf, said Matt Rota, who directs the water resources program for the Gulf Restoration Network in New Orleans.

His network is one of more than 20 environmental organizations making up the collaborative, which is a longstanding project of the McKnight Foundation. They represent nonprofits working along the reaches of the Mississippi and its tributaries from Minnesota to the Gulf.

Rota took a break from meetings at the Mill City Museum to talk with MinnPost.

A local issue
In a sense, the dead zone is a local issue for Minnesota and every other state flanking the Mississippi. From farms to cities, people throughout the mighty river’s basin contribute to the problem.

Nitrogen, phosphorus and other chemicals flowing downstream from those states collect in the Gulf, where they stimulate an unnatural super bloom of algae. The algae die and sink to the bottom, where bacteria decompose them. And the bacteria suck up oxygen, leaving the water in a state known as hypoxia — which means there is inadequate oxygen to support living cells.

In other words, fish must flee for their lives. And slower-moving creatures like oysters and clams can suffocate.

Despite efforts over several years to curb the chemical runoff, this summer’s dead zone was one of the largest measured since researchers from Louisiana Universities Marine Consortium and Louisiana State University began routine mapping in 1985, the scientists reported [PDF] in August.

It covered an area the size of New Jersey, about 7,776 square miles. And it reached far into Texas waters.

Far short of the goal
That is the opposite of what was needed to meet goals set in 2008 [PDF] by a group of federal, state and tribal agencies called The Mississippi River/Gulf of Mexico Nutrient Management Task Force. One goal was to reduce the size of the dead zone (measured in a five-year running average) to less than 1,900 square miles by 2015. Including this summer’s estimate, the current five-year average is 6,680 square miles.

The total area this summer likely is even larger than estimated, Nancy Rabalais said in this year’s report. She was the chief scientist aboard the research vessel Pelican, where measurements were taken. Stormy weather cut short this year’s research mission before the area was fully measured.

The sum of two disasters
Standing alone, these findings would have been cause for concern.

Coming in tandem with the oil spill, they are alarming to many environmentalists.

No one knows the sum of the two disasters at this point, Rota said.

“We really aren’t going to know the full impact for years to come,” he said.

But there is ample reason to worry that aquatic life in the Gulf will suffer. Whether or not populations of fish and other creatures have been depleted this year, it remains to be seen how they will breed and reproduce, he said.

“We need to start monitoring now and make sure we continue to monitor some of these populations over a relatively long period,” he said.

He’s encouraged but skeptical over recent reports that a previously unclassified species of microbe has almost miraculously appeared to rescue the Gulf waters from oil contamination, gobbling away the toxicity faster than anyone had dared hope could be possible.

If anything, the emergence of such microbes should instill deep respect for how much we have yet to learn about sea life, he said.

“How many other things are a mile below the surface of the ocean that we have not discovered … and because of this oil spill, how many will we never discover?” he asked.

Difficult to link conditions
Scientists aboard the Pelican reported that much of the dead zone on the Louisiana coast had been exposed to oil from the BP spill.

“Up to and through the time of the research cruise, there were documented areas of oil sheen seen in satellite imagery west of the Mississippi River,” the report said.

So crew members and scientists were on the lookout for signs of oil. They reported that oil slicks were not continuous over large areas of the zone for extended periods of time. So the oxygen drawdown probably can’t be blamed on the spill.

“It would be difficult to link conditions seen this summer with oil from the BP spill,” said Rabalais, “in either a positive or negative way.”

Still, there are many unanswered questions about how the dead zone and the spill interacted. For example, were fish that typically flee the dead zone forced into oily waters? Or did toxic oil force them to stay put, effectively trapping them in the dead zone where they risked suffocation?

“One of the real difficulties if we do see a problem is going to be teasing out the cause,” Rota said.

In one sense, the cause doesn’t matter to Rota.

“If we have crashes in different populations, I don’t care what the cause is,” he said. “We need to be willing to address all of these issues.”

When he says “all of these issues,” he also includes extensive levies that effectively channel the Mississippi’s waters directly into the Gulf rather than allowing them to spill through marshes and wetlands where sediments rebuild soil at the same time as the marshes filter contaminants from the water.

It’s a one-two-three punch for the Gulf. And it doesn’t have to happen.

“We as a society have the ability to reverse all of these effects, but there has been a lack of political will and an unwillingness to change,” Rota said.