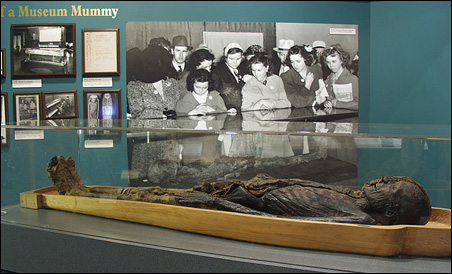 Courtesy of the Science Museum of Minnesota
Thousands of Minnesotans have seen this mummy over the years.

While many a mummy-costumed trick-or-treater heads to the streets this Halloween weekend, Minnesota’s most famous bona fide mummy is going to Children’s Hospital in St. Paul for a CT scan.

The Science Museum of Minnesota has decided it’s time to strip away some of the mystery from the mummy it acquired in 1925 as a donation from the private collection of Mr. and Mrs. Simon P. Crosby.

Thousands of Minnesotans have seen this mummy over the years without knowing much about it.

A few hints came in 1983 when radiographic studies revealed that all internal organs except the heart had been removed during the mummification process, a common practice that confirms the mummy’s authenticity.

Findings from those tests supported the museum’s theory that the mummy probably was a priest. The evidence pointed to a shaven head, callused feet of a man who walked barefoot and hands that showed no signs of extensive manual labor.

That test also suggested this man had lived during ancient Egypt’s 18th Dynasty, a time of famous pharaohs including the renowned boy-king, Tutankhamun.

But the museum’s resident mummy remained a mystery in every other respect.

Now, museums around the world are taking advantage of modern imaging technology to unlock more secrets from mummies in their collections. Borrowing from medicine’s tool kit, they are using computerized tomography — better known as CT — scans which combine hundreds of views of the body taken from many angles to show cross sectional images of the bones.

Anthropologists and museum curators like the CT technology for the same reason doctors like it. For starters, it’s non-invasive. No worries about damaging these ancient treasures.

And the images provide much more information than do plain X-rays, according to the Mayo Clinic. Think slices of a loaf of bread. Each slice can be examined individually or they can be combined in computers to make 3-D images.

Mummies subjected to the CT scrutiny have included:

Why do the scans?

Mummies are the primary records of everyday life in one of the most important periods of human culture and history. They serve as essential source documents for studies of everything from human disease to religious beliefs and practices.

More universally, we humans are curious. We just want to know more about lives of the ancient people whose mysterious bodies we view.

The scan of the mummy at the Science Museum of Minnesota is to be done today under the guidance of St. Paul Radiology’s Dr. David Cox and the staff at Children’s Hospital in downtown St. Paul.

The museum’s goal is to assemble a 3-D model of the resident mummy and gain new clues about his life such as a more precise age and the cause of death. Plans also call for creating new interpretative tools based on the scan results and making the enhanced exhibit available before Feb. 18, the scheduled date for the opening of the travelling exhibition, Tutankhamun: The Golden King and the Great Pharaohs.

Minnesota’s most famous mummy getting a CT scan