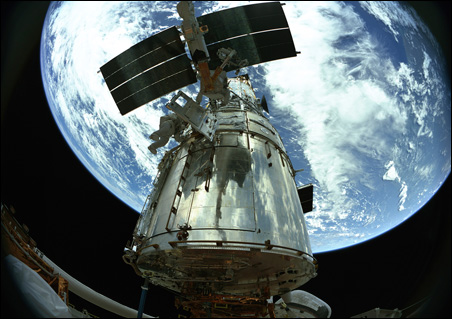 This year’s high school graduates were babies when the Hubble Space Telescope fully opened its sharp eye and treated us to unprecedented views of the universe.

It would be so easy for a new generation to take Hubble’s long gaze for granted. By now, it’s revelations regarding the evolution of the galaxies, the births of new stars and the mysteries of dark matter are standard material in museums and textbooks.

Thanks to a new film, though, that is opening today at the Science Museum of Minnesota’s Omnitheater, we can relive Hubble’s history — savor the dazzling images of the cosmos, sweat the mechanical challenges and applaud the astronauts who risked their lives to keep the telescope operating.

Hubble & shuttle, fading together
This movie opens its Minnesota run at a critical juncture in the U.S. space program. Hubble depended entirely on the space shuttles, and now the two programs are winding down together.

The shuttle Discovery — the oldest active shuttle in NASA’s fleet — is starting its final mission but won’t launch until next week after another delay today over a leak problem. Discovery launched the Hubble in 1990.

After more than three sometimes-tragic and often awe-inspiring decades, the shuttle program is set to make just one or two more missions and then shut down by next summer.

Meanwhile, Hubble’s replacement — the James Webb Space Telescope — is slated to launch in 2014.

The remaining shuttles, no doubt, will go to museums. As things stand now, Hubble will slowly degrade and slip out of orbit some 350 miles from Earth. Whatever parts survive the fiery plunge through the atmosphere will fall into the ocean.

Ideal time
The sum of these developments make this the ideal time to see “Hubble,” the movie, to relive the history and celebrate the contributions this school-bus-size observatory has made to our quest to understand the cosmos.

The film’s best feature is the chance to relish Hubble’s imagery on Omnitheater’s giant screen. You travel across vast canyons of gaseous clouds, visit a star nursery in the Orion nebula and look back to some great views of planet Earth, too. 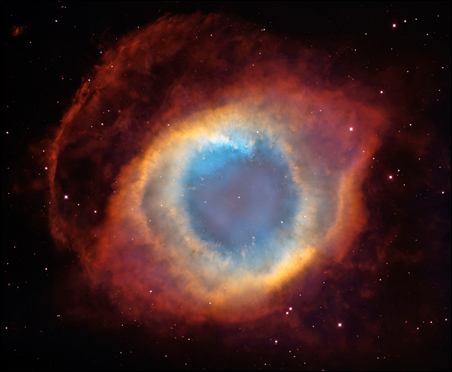 Copyright 2010 Warner Bros. Courtesy of NASA, ESA, C.R. O’Dell (Vanderbilt University), M. Meixner and P. McCullough (STScI)
This composite of the colorful Helix Nebula is one example of the many images in the film Hubble, which opens on November 5 in the Science Museum of Minnesota’s Omnitheater.

The scenes the astronauts captured alternate between the breathtaking (dangerous space walks) and the mundane (making a burrito in zero gravity).

If the film has a weak spot, it’s the cliché-ridden and cheesy script. Leonardo DiCaprio, the narrator, gushes that Hubble gives us a new appreciation “for the perfect utopia” we inhabit on planet Earth. Tell that to the earthquake victims in Haiti and the flood survivors in Pakistan.

Astronauts as icons for an era
Some of the video segments could be considered clichés, too, at this point in the shuttle program. How many times have we seen the parade of the orange-suited astronauts preparing to board the shuttle? How many ground-shaking launches of the shuttles?

I have to admit that I loved those familiar images, though, because I knew they were among the last original footage that Americans will see from the programs that have given us so many proud and wonder-filled moments for nearly half a century.

And the film’s final images of galaxies forming a dazzling array of cosmic light erased my irritations about the script.

The film was produced by IMAX and Warner Bros. Pictures in cooperation with the National Aeronautics and Space Administration. More information about show times and the film itself is available at the Science Museum’s website.