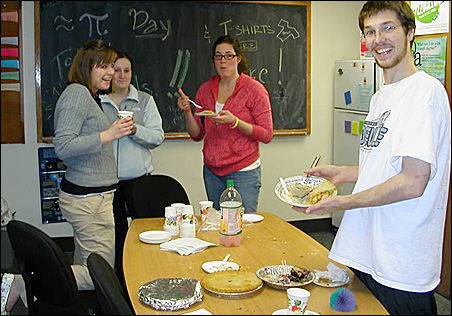 If you notice a shortage of pies at your local bakery today, you can blame it on mathematicians.

For today, March 14 — or, more to the point, 3/14 — is Pi Day, an annual event celebrated by mathematicians in Minnesota and around the world.

Pies, naturally, are favorite treats on such a day — and not only because pie is a homonym of pi. Pies are also round, and, as you may remember from your high-school geometry class, pi (or π) is the ratio of the circumference of a circle to its diameter.

Pi’s irrationality
Of course, pi’s decimal places don’t stop at two; they go on forever. Computers have calculated more than a trillion digits for pi without finding either an end or a pattern.

That makes pi an irrational number — one that can’t be expressed as a fraction.  (The fraction that gets the closest is 355/113, which expresses pi accurately to six decimal places.)

“There are more irrational numbers than there are rational numbers, which is strange, because they’re both infinite,” says Jody Sorensen, PhD, an associate professor of mathematics at Augsburg College in Minneapolis.

How can one type of number be more infinite than another? “You can count rational numbers,” explains Sorensen, “but you can’t make a list of all the irrational numbers.”

The “discovery” of irrational numbers like pi — the concept of infinity — was so disturbing to the ancient Greeks that when a mathematician named Hippasus revealed their existence, he was (according to legend) taken to sea and drowned.

“It was similar to the reaction to Galileo when he said the Earth revolves around the sun,” says Douglas N. Arnold, PhD, professor of mathematics and director of the Institute for Mathematics and its Applications at the University of Minnesota. “It changed their whole worldview.”

A universal constant?
In addition to being irrational, pi is also a mathematical constant: The number is the same no matter which circle you use to compute it.

But is pi constant throughout the universe? Or, as mathematicians sometimes phrase the question: Did we humans invent pi, or did we discover it?

Arnold leans toward discovery. “It’s conceivable that some other intelligence out there wouldn’t have a pi,” he says, “but I, personally, believe not. I believe pi is out there.”

Transcendental, too
What makes pi really rare, however, is the fact that it’s a transcendental number: It can’t be the solution of a polynomial equation. For you non-math majors, that means pi will never be the answer to an algebraic question on a test, no matter how many times you add, subtract, multiply or divide integers, or take them to their nth roots.

The transcendental nature of pi is why a circle can’t be squared — in other words, why it’s impossible to use only a ruler and compass to form a square with the same area as a given circle.

Only a few types of transcendental numbers are known, and proving their existence is very, well, problematic.

The proof that pi is a transcendental number is attributed to the 19th century German mathematician Carl Louis Ferdinand von Lindemann, but many historians think he simply got lucky after reading and borrowing a proof method developed by the more brilliant French mathematician Charles Hermite, who discovered another transcendental number, e (the base of the natural logarithm), around the same time.

Celebrating Pi Day is as easy as …
You’ll find a vast (dare we say “infinite”?) number of recommendations on the Web for how to celebrate Pi Day, from wearing a necklace with beads that represent the numbers in pi to going for a “pi” run (3.14 miles) to writing “pi-ku.”

Some Pi Day parties feature “pi memorization” contests. If you want to set a record, however, you’ll have a lot of memorization to do. In 2005, Chao Lu of China recited from memory the first 67,890 decimal places of pi. Since then, unofficial reports of people memorizing 100,000-plus decimal places have also appeared in the press.

Local pi parties
At Augsburg College, Sorensen and her colleagues and students celebrated this year’s Pi Day on Wednesday (the numerically uninteresting date of 3/12) because the school is on spring break today.

“Pi Day has been going on for years,” says Sorensen. “This year we kept it simple and just served pies all day long.”

At St. Olaf College in Northfield, Minn., the math department will be serving its pies along with a popular Pi Day presentation by Luke Anderson, a St. Olaf administrator, former math major and pi enthusiast. This will be the ninth year that Anderson, who hosts a Pi Day website “for teachers and number lovers,” will be presenting his tribute to pi at the college.

The 4 p.m. show includes a performance by Anderson’s alter ego, Pi Diddy, of the rap song “Lose Yourself (In the Digits),” a parody of Eminem’s well-known hit. (You can listen to the Pi Diddy song here.)

Anderson will also recite the first 250 digits of pi from memory. “That’s the number I eventually settled on,” he explains. “It’s not too big to be truly absurd, but big enough to share at parties.”

The mystery continues
As ancient Babylonian tablets and Egyptian papyruses show, mathematicians have been puzzling over pi with awe and wonder for thousands of years.

“The beauty of pi is that it’s so mysterious, yet so basic to the world and to our lives,” says Anderson. “Every circle around us basically holds pi within it.”

Many things are still unknown about the number, adds Arnold. “For example, it is not even known for sure that all the digits 0 through 9 occur infinitely often in its decimal expansion, though we certainly believe that they do,” he says.

The best time to start your Pi Day celebration today is, of course, at 1:59 p.m. and 26 seconds (aka Pi Minute and Pi Second). And don’t forget to raise your pina colada or pineapple juice (two recommended Pi Day drinks) in honor of Albert Einstein, whose birthday is also today and who knew a thing or two (or 3.14) about pi.

Should you miss this year’s celebrations, don’t worry. Pi Approximate Day — July 22 — is also celebrated. In international date format, July 22 is 22/7, the fraction used by ancient mathematicians to approximate pi.

On Pi Approximate Day, however, it’s traditional to forgo pies for something that only approximates their shape — say, a fried egg.