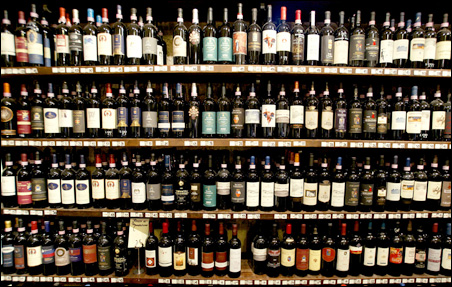 REUTERS/Max Rossi
Bottles of Brunello di Montalcino are displayed in Montalcino, Italy. Will drinking red wine — or pills with resveratrol — do you any good?

Last month, after her photograph kept popping up unauthorized alongside Internet ads for resveratrol (aka “red wine”) supplements, ABC reporter and talk show host (“The View”) Barbara Walters was forced to issue a statement to make it clear that she did not endorse them.

“I have no idea if any of these products work and I rather doubt that they do,” she wrote.

You could be forgiven, however, for thinking otherwise — at least from Walters’ rather breathless narration of a segment on resveratrol that appeared on her 2008 television special on longevity. In that piece (which at times borders on a Daily Show spoof), Walters clinks wine glasses — not once, but twice! — with David Sinclair, PhD, a Harvard Medical School biologist who’s pioneered much of the research on resveratrol.

The strongly implied take-away message of the segment (at least to this viewer): Resveratrol may very well be the elusive elixir of youth.

Not that most other media reports haven’t been equally enthusiastic — and unskeptical — about health claims for resveratrol: It may prevent aged-related diseases like heart disease! Diabetes! Arthritis! Cancer! It may give you more endurance! More strength! Smoother skin! It may keep your mind and memory sharp! It may even add a decade or more to your life!

No wonder the pharmaceutical giant GlaxoSmithKline bought Sinclair’s own fledgling pharmaceutical company for $8 million last year — and continues, according to the Wall Street Journal, to pay the professor $297,000 a year as a Glaxo consultant.

Sales of resveratrol supplements have taken off in recent years. Reportedly, the annual worldwide market for the supplements currently stands at about $20 million.

Another view
Before you spend any of your own hard-earned money on resveratrol pills, capsules, powders or creams (and a one- to two-month supply of pills alone can apparently set you back as much as $150), I suggest you read an article published last week in the Los Angeles Times (hat tip, Schwitzer Health News Blog). It’s a (rare) cautious and multisourced examination of what scientists actually know (or, more to the point, don’t know) about resveratrol’s effects on health and longevity.

[T]he business of selling the supplement touted as an “anti-aging miracle” rests on a foundation of science that is as unstable and incomplete as it is promising. In fact, the marketing frenzy surrounding resveratrol is a prime example of how science can be distorted when it is mingled with hope, amplified for buzz and spun for profit.

In Healy’s report, Sinclair appears much more cautious — and less boosterish — than he was a year earlier with Walters. “I am surprised at the interest [in resveratrol supplements], if you consider that the long-term effects in humans are not known,” he told Healy. “The short-term effects are fine. But we don’t know what happens if you take this for two decades. There are thousands of people performing a massive experiment.”

A few of the other let’s-cool-down-the-rhetoric-on-resveratrol points from the Times story:

As Healy sums up:

Resveratrol, in short, stands at the juncture of hope, profit and scientific promise – a social phenomenon galloping ahead of research that is undeniably intriguing but very incomplete. It is a formula for the age-old warning: caveat emptor, or buyer beware.

We can all drink to that.