A study published today in the New England Journal of Medicine (NEJM) raises serious questions about the skyrocketing use in the United States of computed tomography (CT) scans and other diagnostic imaging procedures.

The study, which analyzed three years (2005-2007) of medical data from nearly 1 million adults aged 18 to 64, found that such procedures are bombarding a significant number — about 4 million — Americans with potentially cancer-causing doses of radiation. Yet the tests are often used in situations where their value hasn’t been proven.

Medical imaging has, of course, saved many lives. No one’s denying that. The problem, however, is that these technologies are overused. As Michael Lauer, M.D., of the National Heart, Lung, and Blood Institute points out in an editorial accompanying the NEJM study, the United States performs more imaging tests per person than any other country in the world.

Since 1992, the number of CT scans alone has quadrupled — a worrisome development, Lauer notes, for a 2007 study suggested that as many as 2 percent of cancers may be attributable to CT scans.

The chart below depicts the rise in U.S. use of advanced medical imaging from 1995 to 2005. 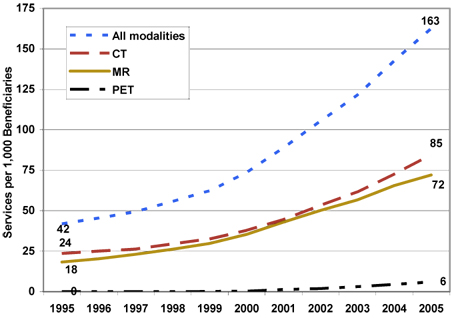 CT scans, along with myocardial perfusion scans (a nuclear stress test used to evaluate the heart), are at the core of the problem, according to the NEJM study. These two tests accounted for 21 percent of the total number of procedures undertaken by the people in the study — but more than 75 percent of the total exposure to radiation.

It all adds up
The cumulative effect of imaging procedures is what’s so troubling, but no one — neither doctors nor patients — seems to be tracking that danger.

“The issue of radiation exposure is unlikely to come up because each procedure is considered in isolation, the risks posed by each procedure are low and seemingly unmeasurable, and any radiation-induced cancer won’t appear for years and cannot easily be linked to past imaging procedures,” notes Lauer.

Yet, he adds, “[t]hough the danger may be small, it is cumulative and hence of particular relevance to the small but substantial minority of people who … undergo clusters of tests. Exposure to even moderate degrees of medical radiation presents an important yet potentially avoidable public health threat.”

No financial accountability
Another interesting finding: Some 82 percent of the radiation received by people in the study occurred not in hospitals, but in outpatient settings — usually in a physician’s office.

The lack of financial accountability — by patients as well as physicians — is undoubtedly a factor in the overuse of these procedures. Says Lauer:

Most physicians who order imaging tests experience no consequences for incurring costs for procedures of unproven value. On the contrary, they or their colleagues are paid for their services, and their patients don’t complain because the costs are covered by third parties. Patients are pleased to receive thorough evaluations that involve the best cutting-edge technologies. Physicians can easily defend their practices because their specialty societies argue that the procedures are “appropriate.”

Lauer calls for the adoption of “a new paradigm for our approach to imaging”:

Instead of investing so many resources in performing so many procedures, we should take a step back and design and execute desperately needed large-scale, randomized trials to figure out which procedures yield net benefits. This approach would require leadership and courage on the part of our profession, our opinion leaders, and the research enterprise.”

Leadership and courage? On a health-care reform issue?

I wonder how that will go.

More evidence for U.S. overuse of CT scans and other medical imaging