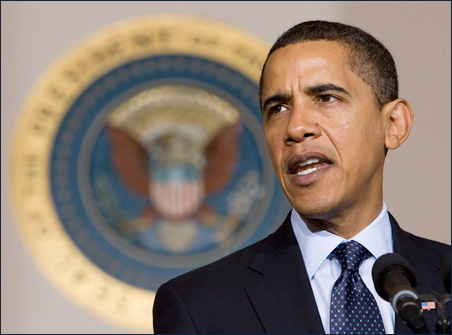 REUTERS/Larry Downing
Colorado researchers point out studies have found an association between negative racial attitudes and opinions of President Obama and his policies.

A study has found that subtle (and often unconscious) negative racial attitudes toward African-Americans may have made white voters more susceptible to criticisms of Barack Obama during his 2008 presidential campaign — and may continue to prejudice their evaluation of his presidency today.

In fact, such negative racial attitudes may even explain the popularity of one of the most ridiculous claims about President Obama — that he is the Anti-Christ. Sadly, a substantial minority of Americans (for example, 18 percent of political conservatives in New Jersey, according to one poll) believe this nonsense. One of their “proofs”: Obama’s name has 18 characters, and 18 divided by 3 is 6, and 666 is the symbol of the Anti-Christ. (Yes, sometimes it does seem that we’ve never left the Middle Ages.)

“[A]lthough egalitarian values prevent most people from overtly expressing and even privately acknowledging racist attitudes, anti-Black sentiment persists in subtle form,” write University of Colorado psychologist Tom Pyszczynski and his co-authors in the new study, which has been accepted for publication in the Journal of Experimental Social Psychology. (You can read the abstract here.)

Other studies, the Colorado researchers point out, have also found an association between negative racial attitudes and opinions of Obama and his policies. For example, one study (in press) found that such attitudes “predicted opposition to healthcare reform when [the reform] was attributed to Obama but not when it was attributed to Bill Clinton.”

And before anybody out there feels too smug, these findings were found among people of all political orientation.

The study’s methodology
The Colorado study was conducted about a month before the 2008 election. The researchers enlisted 62 women and 26 men, aged 18 to 59. All were of non-African descent. They were told they were participating in a study to evaluate the relationship between creativity and attitudes.

Next, the volunteers were asked to read one of three editorials about Obama. One (“Is Obama the Anti-Christ?”) used statements from various websites to point out similarities between Obama and claims made about the Anti-Christ. Another (“Should Obama Be Running for Office?”) was a more mainstream but still highly negative editorial; it criticized Obama for being unpatriotic and friendly to terrorists. The third (“Interview with Obama’s Campaign Manager”) was a straightforward series of statements of Obama’s position on various issues, without criticism or praise.

The volunteers then completed a questionnaire that measured their evaluation of Obama and Republican candidate John McCain. For example, they were asked to rate such statements as “Barack Obama is too inexperienced to be president” and “John McCain is too old to be president.” They were also asked which candidate they were most likely to vote for.

Findings
The study found that “racial priming” — in this experiment, writing a short story about “Tyrone Walker” — made negative criticisms of Obama, including the ludicrous claim that he’s the Anti-Christ, more likely to decrease people’s support for him.

Conversely, not being racially primed (writing about “Brad Walker” before reading the negative essays) increased support for Obama.

That fact, say the study’s authors, “shows that the Anti-Christ claims were not persuasive when racial concerns were not activated. These findings thus help explain the impact of extreme and otherwise unpersuasive claims by demonstrating that activation of racial concerns makes them more persuasive.”

Such findings also suggest that people are more influenced by subtle forms of racial animosity than they’re willing to admit — even to themselves.

“This also helps explain why some people endorse ideas that most see as untenable — such as the claim that Barack Obama is the Anti-Christ, a supernatural sources of evil,” say the study’s authors. “… Thus, an unfortunate side effect of Obama’s ethnic identity, and that of other leaders and politicians of color, is that it may discourage rational debate.”