Two decades ago, an Indiana gynecologist, Dr. Frank Meshberger, startled the art world by proposing that Michelangelo’s iconic “Creation of Adam” fresco on the Sistine Chapel in Rome contains a hidden — and anatomically correct — illustration of the human brain.

The great Italian Renaissance painter and sculptor may have intended to depict God instilling Adam with intelligence as well as with “the spark of life,” Meshberger argued.

It’s an interpretation that has gained some support among art scholars. After all, Michelangelo was a master anatomist, and performed numerous cadaver dissections throughout his life to better understand human anatomy. It’s unlikely he would have overlooked the brain in these studies. But it’s also unlikely he would have been obvious in his depictions of what he learned during his surreptitious dissections. (We know little about these studies because, unlike his contemporary and rival, Leonardo da Vinci, Michelangelo reportedly destroyed most of his anatomic sketches and notes, perhaps because he worried that his employer, the Vatican, would disapprove of his dissections of corpses.)

Michelangelo’s use of brain anatomy as a hidden symbol may not have stopped with the “Creation of Adam,” however. In a recent issue of Neurosurgery, medical illustrator Ian Suk and neurosurgeon Dr. Rafael Tamargo of the Johns Hopkins University Medical School in Baltimore, Md., argue that another panel in the Sistine Chapel, the “Separation of Light From Darkness,” contains a hidden frontal view of the brainstem (the structure that connects the brain with the spinal cord).

“The ‘Separation of Light from Darkness’ is an important panel in the Sistine Chapel iconography because it depicts the beginning of Creation and is located directly above the altar,” write Suk and Tamargo. “We propose that Michelangelo, a deeply religious man and an accomplished anatomist, intended to enhance the meaning of this iconographically critical panel and possibly document his anatomic accomplishments by concealing this sophisticated neuroanatomic rendering within the image of God.” 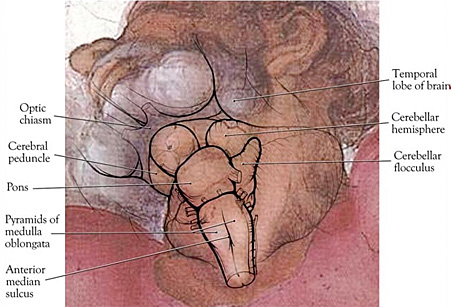 Courtesy of Neurosurgery
Specific midbrain structures correspond to the unusual features in God’s neck as depicted by Michelangelo.

Art critics and historians alike have long been puzzled by the un-Michelangelo-like anatomical inaccuracies that appear in the depiction of God’s neck in this fresco. So out-of-character are these inaccuracies that two Swedish researchers were led to suggest a few years ago that the artist’s intention may have been to give God a goiter (an enlarged thyroid).

Suk and Tamargo propose, however, that Michelangelo used this area of the painting not to show a goiter (which, for a deeply religious artist like Michelangelo, could have been viewed as a defilement, they say), but to illustrate the structure of the human brainstem.

The Johns Hopkins researchers also argue that two other irregularities — the unusual amount of light directed on God’s neck and God’s oddly rolled-up beard (elsewhere in the Sistine Chapel, the beard is long and flowing) — were intentionally incorporated into the painting by Michelangelo to draw attention to that hidden brainstem.

“Given that the brainstem is a conical structure, Michelangelo concealed it in the anterior space of the neck, which has a similar configuration,” write the researschers. “In addition, it places the brainstem close to its anatomic position, if one could see it through the neck structures. This is a strikingly sophisticated ‘phantom view’ of the ventral [front] brain, but one that would not have been beyond the talent of an artistic genius who also happened to be a master anatomist.”

And why would Michelangelo put a brainstem in God’s neck? To celebrate, say Suk and Tamargo, “not only the glory of God, but also that of His most magnificent creation.”