Wolfgang Amadeus Mozart died at the age of 35 in the early morning hours of Dec. 5, 1791. That much everybody seems to agree on.

But what illness killed him? Ah, that has been a continual matter of speculation — and controversy — for more than 200 years. 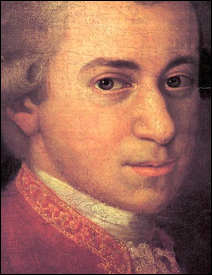 Thanks to the 1979 play (and later the movie) “Amadeus,” many people think Mozart was poisoned by one of his musical rivals, Antonio Salieri. Highly improbable, say most historians.

Yet, although murder may be currently the best-known hypothesis for Mozart’s early demise, it’s far from the only one — or even the most far-fetched. As a provocative article in the Dec. 15 issue of the British Medical Journal (BMJ) points out, at least 140 different illnesses have been individually proposed as the cause of Mozart’s death.

In addition, some 27 different mental illnesses have been ascribed to the German-Austrian composer.

All that rabid speculation sheds more light on our need to feel superior to creative geniuses than it does on the reality of Mozart’s physical and mental health, claims Dr. Lucien Karhausen, the author of the BMJ article.

The elephant and the blind men
But first let’s look at the diagnoses themselves. “Mozart died only once,” writes Karhausen, so only one (or maybe none) of the hypotheses about his death can be true. The correct diagnosis, he adds, is likely to be found among the initial (and more mundane) ones given — influenza, typhoid fever or typhus.

Many of the other diagnoses call to mind the story of the elephant and the blind men. Here’s Karhausen’s rundown of some of them:

More recent — and even less probable (except for that last one) — diagnoses have included such rare conditions as Goodpasture’s syndrome, Wegener’s granulomatosis, Still’s disease and Henoch-Schonlein purpura.

“Mozart’s death has become a free for all, a grabbing of hypotheses,” says Karhausen.

Mentally unstable?
Mozart’s mental health has also been wildly speculated upon. He’s been diagnosed as being a manic depressive and a pathological gambler, as well as having a host of psychiatric conditions, including attention deficit/hyperactive disorder, paranoid disorder, obsessional disorder, dependent personality disorder and passive-aggressive disorder.

“Most of the 27 psychiatric disorders attributed to Mozart result from disregarding or misquoting the criteria that demarcate normal from abnormal behavior,” writes Karhausen. “Some authors upgrade daily worries into paranoid ideas or anxiety neuroses; blues or genuine worries into depression; elation into hypomania; linguistic games into jargonophasia; wit into immature or manic behavior or into a childish, psychotic other self; the dissonant harmonies of the Haydn quartets into Tourette’s syndrome; and, at the end of his life a small shuddering into a convulsion.

“[P]sychobiographers often indulge in the illusion of uncovering Mozart’s hidden mental life while they actually described their own preoccupations and obsessions,” Karhausen adds.

The need to see artists as different or ‘deviant’
Karhausen quotes the late British psychiatrist Eliot Slater, who observed that people “find little interest or merit in the products of an energetic and healthy normality. … If, however, we find [Mozart’s] personality strange or difficult to understand, then we may only be able to bear comparison by trying to cut down the man or his work to our own scale. We can do this more easily if, at any point, we are able to look down on him from above, from a superior level of sanity, or social competence or moral integrity.”

Karhausen agrees. Making Mozart out to be neurotic or “deviant,” he says, “covers the hidden intent to pull an exceptional creator down from his pedestal through some obscure need to cut great artists down to size. It is reminiscent of Rameau’s nephew in Diderot’s novel who says about people of exceptional creativity: ‘I never heard any single one of them praised without it making me secretly furious. I am full of envy. When I hear some degrading feature about their priveate life, I listen with pleasure. This brings me closer to them. It makes me bear my mediocrity more easily.’

“If there ever was a musician in the whole history of music who was mentally healthy,” adds Karhausen, “it was beyond the shadow of a doubt Mozart, in the probable company of Joseph Haydn.”

You can read Karhausen’s article here.

What killed Mozart? And why do we keep asking that question?