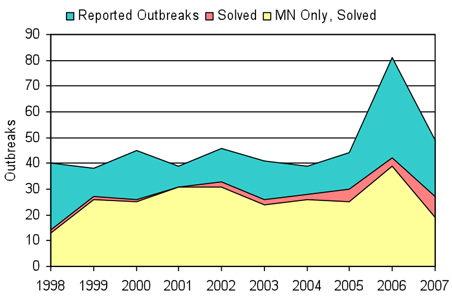 Source: Center for Science in the Public Interest
Trends in reported and solved outbreaks in Minnesota. In 2007, Minnesota reported 49 outbreaks to the CDC.

Minnesota was one of only seven states that received an “A” grade in a new report that examined how well the 50 states and the District of Columbia detect, investigate and report outbreaks of foodborne illnesses.

In fact, the report, released Wednesday by the nonprofit Center for Science in the Public Interest (CSPI) in Washington, D.C., used Minnesota and another “A” state, Oregon, as benchmarks. It said both states “are known for having excellent laboratory facilities and strong public health departments that quickly interview individuals who are suspected outbreak cases.”

You’d think officials over at the Minnesota Department of Health (MDH) would be thrilled at being ranked at the head of the class, so to speak. Well, they’re certainly happy with the state’s “A” grade, said Kirk Smith, supervisor for the MDH’s foodborne disease unit, in a phone interview. But they’re not sure it means that much.

“I fully believe that we’re one of the best,” Smith said, “but at the same time [the CSPI report] used just one criterion. It’s not really a comprehensive assessment of what makes a health department good.”

That criterion used by CSPI is the number of foodborne outbreaks per million people per year that a state reports to the Centers for Disease Control and Prevention. After analyzing data from 10 years (1998-2007), CSPI determined that Minnesota reported a median number of eight outbreaks a year during that period. Florida, Hawaii, Maryland, Washington and Wyoming matched that number.

Only Oregon scored better, with nine reported outbreaks a year.

CSPI acknowledges in the report that it may be counterintuitive to praise a state for reporting more outbreaks, but the organization says it believes that “those states are the most likely to have robust detection and reporting systems.”

“States that aggressively investigate outbreaks and report them to CDC can help nail down the foods that are responsible for making people sick,” said one of the report’s authors, CSPI food safety director Caroline Smith DeWall, in a prepared statement. “But when states aren’t detecting outbreaks, interviewing victims, identifying suspect food sources, or connecting with federal officials, outbreaks can grow larger and more frequent, putting more people at risk.”

Although Smith wouldn’t name names, he indicated he wouldn’t agree with all the grades handed out by CSPI. “Some states that I know are good ones received low grades,” he said.

Budget cutbacks pose threat
One thing in the report that Smith does agree with is the concern that government budget cutbacks may eventually weaken health officials’ ability to aggressively track down foodborne illnesses.

“With our big deficit [here in Minnesota], there is concern that there will be further cutbacks,” he said. “We have a pretty robust system in place, so we can absorb some cuts. But it might get to a point where it will be quite concerning.”

Efforts to identify foodborne illnesses (so that the outbreak can be stopped and more people do not become sick) are not cheap. In addition to the laboratory costs, there are the epidemiological costs — sending staff out into the field to interview people who may have been exposed to the suspected food.

Minnesota, fortunately, is able to call on students at the University of Minnesota’s School of Public Health to do some of that interviewing, Smith said.  “It gives us a cost-effective advantage,” he added.

Solved vs. unsolved cases
The CSPI points out another trend that it calls troubling: the decline in the percentage of solved outbreaks, which it defines as those outbreaks that end up with both an identified food and an identified pathogen. In 2001, some 44 percent of outbreaks reported to the CDC were solved, CSPI reports. In 2007, only 34 percent were reported solved.

That drop may reflect budget cuts. Smith, however, isn’t as worried by reported-but-unsolved outbreaks as CSPI. Not all outbreaks need to have the precise food source identified in order for interventions to be effective, he said. “You can usually tell if it’s norovirus [the most common cause of food-related illnesses] after interviewing a few people and without getting laboratory confirmation,” he said.

It would be a waste of resources, he added, to try and nail down the precise food source in many of those cases.

What consumers can do
The authors of the CSPI report urge individuals to report gastrointestinal illnesses that are accompanied by vomiting and diarrhea to their state health department. And, indeed, that’s how the majority of outbreaks — particularly norovirus ones —  are discovered here in Minnesota.

But all too often, said Smith, cases go unreported, mostly because people mistakenly self-diagnose themselves as having a “stomach flu.”

“We hate the term ‘stomach flu,’ ” he explained. “People confuse it with influenza.”

Both illnesses, of course, can be dangerous — even life-threatening — particularly to the very young, the very old and those with compromised immune systems.

The other major reason people don’t connect their illness with food poisoning is because it can take as long as a week after eating a pathogen-contaminated food for symptoms — the vomiting and diarrhea — to strike.

“With norovirus, it’s typically 12 to 18 hours” before symptoms appear, said Smith. “We query people about what they’ve eaten for the previous four days because sometimes [the source of the pathogen is] further back in their food history than they think.”

For information about when and how to make a confidential report of a suspected foodborne illness to the Minnesota Department of Health, go here. And you can read the CSPI report here [PDF].

(Full disclosure: I worked as an editor for CSPI many years ago. I’ve also done work, although not recently, for the Minnesota Department of Health.)