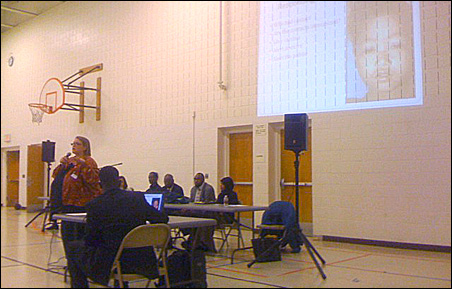 MinnPost photo by Susan Perry
Health officials, physicians and leaders of the Somali community led a forum on the safety of the measles vaccine at the Brian Coyle Center on Saturday.

Fear and frustration seemed to be the prevailing emotions at Saturday’s Somali community forum on Minnesota’s current measles outbreak.

The fear came from parents in the audience — some Somali, some not — who believe that the measles, mumps and rubella (MMR) vaccine causes autism. In the Somali community, this fear has escalated during the last two years, after a Minnesota Health Department study found that Somali children were disproportionately represented in Minneapolis school system’s autism programs.

The frustration at Saturday’s forum came from public health officials and physicians who know the scientific evidence shows no link between MMR and autism and who are worried that if parents continue to refuse to have their children vaccinated, the measles outbreak will grow — and we’ll have more outbreaks in the future.

As Dr. Osman Harare, a Twin Cities pediatrician and one of two Somali doctors who spoke at Saturday’s forum, pointed out (through a Somali-to-English translator), “There are no facts to prove MMR causes autism. … We have to make sure that all our children are vaccinated against the measles.”

Not innocuous
As of Saturday, some 11 cases of measles had been confirmed in Hennepin County since February. The Minnesota Department of Health believes that all but one of those cases are connected to an unvaccinated boy who became infected with the measles while traveling in Africa. (The one unconnected case was in a 35-year-old man, who appears to have become infected in another state.)

Five Six children involved in the current epidemic have been hospitalized due to complications from the measles. All are recovering.

“Measles is not just an illness where you get a rash, a fever and a running nose,” Dr. Sheldon Berkowitz, a pediatrician at Children’s Hospital in Minneapolis, told parents at Saturday’s forum, which was attended by about 60 people. One in 20 children with measles develop pneumonia, he said, and 1 in 1,000 develop encephalitis, which can lead to permanent brain injury.

And one in every 500 to 600 children with measles dies from such complications, he added.

Dr. Abdirahman Mohamed, a family practitioner at the Axis Medical Center in Minneapolis, underlined that point. He spoke of six young unvaccinated Somali-American children, including two from Minnesota, who have died since 2008 after contracting the measles while visiting family in Africa.

“It’s a good thing [for children] to go back to their homeland,” he told the forum’s audience, “… but they have to be safe.”

A mother changes her mind
Perhaps the most effective speaker at the forum was Hodan Hassan, a young mother who spoke passionately about how she had once believed that the MMR vaccine had caused her daughter, now 6, to develop autism. Hassan said she had been influenced by the work of Andrew Wakefield, the British doctor whose since-discredited 1998 paper was instrumental in suggesting a link between autism and the MMR vaccine — and in launching the now worldwide anti-vaccine movement.

Hassan went to hear Wakefield speak at a Somali community meeting when he was in Minneapolis last December. (Wakefield was stripped last year of his British medical license and appears to now live in the United States.) Her child’s physician, however, suggested that Hassan do her own research before coming to any conclusions. She did — and found, she said, “that there is no connection” between autism and MMR.

“If you need someone to give you details, see Somali doctors, rather than someone who has no license,” she told the other parents at Saturday’s forum.

After the event, Hassan told me that she believes that continuing to argue over whether or not MMR causes autism is a waste of time and resources. “That research has been done, and it’s foolproof,” she said. “It’s time to look at something else.”

Some remain unconvinced
Based on my conversations with several other Somali parents after the forum, which was held at the Brian Coyle Center in Minneapolis, many parents are reluctant to look elsewhere for causes of autism — or, at least, they’re reluctant to let go of the idea that vaccines are involved.

One Somali parent of a child with autism, Sophie Ali, told me that she hadn’t heard anything at the forum that would change her mind about the connection between the MMR vaccine and autism.

“Who do you believe?” she said.

And that seems to be the issue. Right now Ali and other parents continue to believe Wakefield and his ardent anti-vaccine supporters — supporters like Patti Carroll of Shoreview, who during the forum’s question-and-answer period charged Berkowitz and Mohamed with making “untrue” statements about MMR and autism.

Carroll was also an organizer of an event last Wednesday night that brought Wakefield yet again to Minneapolis to talk with Somali parents (reportedly, his third such visit since December). Members of the media, including me, were turned away from the event, as were public-health officials.

At that event, while she was screening people who wanted to enter, Carroll, who has a teenager with autism, told me that she wasn’t concerned about the current measles epidemic.

“At this time it doesn’t ravage the population like it did before,” she said.

Most of the Somali parents she has talked with, she added, are “thrilled” to have their children get the measles rather “than deal with the effects of the vaccine.”

Needless to say, that kind of attitude angers as well as frustrates health officials. Anyone who has studied the history of measles knows that it used to kill hundreds of children each year in the United States and left hundreds more with permanent brain injuries. Worldwide, measles still claims the lives of 200,000 people annually.

Still, some health officials see signs that attitudes toward childhood vaccines may be changing, at least in the Somali community — and the current measles epidemic may be serving as the catalyst. Mohamed told me of a Somali mother who recently said to him, “Autism is not going to kill my child, but measles will,” and consented for the first time to having her child vaccinated.

“We need a concerted effort to counter the misinformation,” Mohamed said.

If Saturday’s event is an indication, however, it’s going to take some time.