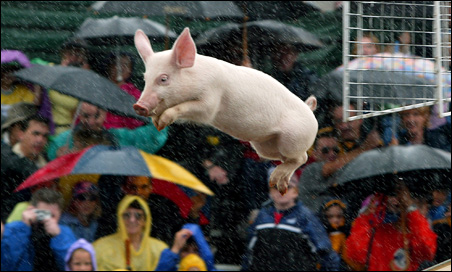 Each April Fool’s Day, the James Randi Educational Foundation (an organization dedicated to exposing pseudoscientific claims) “honors” what it calls “the five worst offenders who are intentionally or unintentionally pulling the wool over the public’s eyes.”

Winners receive a Pigasus Award, named for both the Greek mythical flying horse Pegasus and for the popular cliché (and, apparently, centuries-old Scottish proverb) that states that such-and-such will be true “when pigs fly” (meaning, of course, never).

This year’s Pigasus honorees were announced last Friday, and three are in the health field. Regular Second Opinion readers will be familiar with one name: Andrew Wakefield, the discredited British researcher (and former doctor — he lost his medical license last year) who continues to stir up scientifically unfounded fears about childhood vaccines, including here in Minnesota.

Wakefield was given the “Refusal to Face Reality Award” by the Randi Foundation.

Another familiar name — cardiac surgeon and Oprah protégé Dr. Mehmet Oz — received, for the second year in a row, the “Media Pigasus Award.” Oz was chosen for his promotion on his syndicated TV show of such medical nonsense as faith healing, Ayruvedic tongue diagnosing, and so-called energy medicine.

“This year, he really went off the deep end,” the Randi Foundation notes in its press release about the awards. “In March 2011, Dr. Oz endorsed ‘psychic’ huckster and past Pigasus winner John Edward, who pretends to talk to dead people. Oz even suggested that bereaved families should visit psychic mediums to receive (faked) messages from their dead relatives as a form of grief counseling.”

Oz had also promoted homeopathy on his show, and proudly proclaims that his wife gives the scientifically debunked medicines to their children. Homeopathy features in a third Pigasus award this year. The Randi Foundation bestowed the “Funder Pigasus Award” to CVS/pharmacy for its  “work to support the manufacturers of scam ‘homeopathic’ medications who sell up to $870 million a year in quack remedies to U.S. consumers.”

“CVS/pharmacy sells these quack products in thousands of stores across the U.S.,” states the foundation’s press release, “right alongside real medicine, with no warning to consumers. Instead of giving their customers the facts about homeopathy, CVS/pharmacy executives are cashing in themselves by offering their own store-brand of the popular homeopathic product oscillococcinum. Oscillococcinum is made by grinding up the liver of a duck, putting none of it onto tiny sugar pills — that’s right, none of it — and then advertising the plain sugar pills as an effective treatment for flu symptoms.”

This year’s other two Pigasus awards went to the following:

Will there ever come a time when the public is significantly scientifically literate to not fall for such nonsense?

Considered state of the art at its opening, the Anoka State Hospital eventually fell behind ideas about mental health care