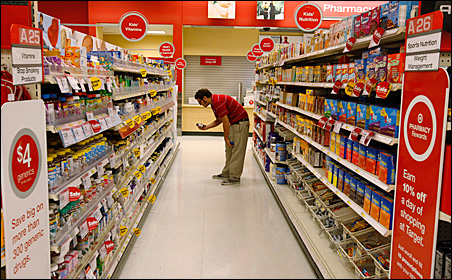 REUTERS/Fred Prouser
Women are more likely to take supplements than men, the most popular being calcium.

As the Centers for Disease Control and Prevention (CDC) reported earlier this month, Americans are downing an increasing number of dietary supplements, particularly multi-vitamins and multi-minerals.

The report also found that women are more likely to take supplements than men (59 percent versus 49 percent). And one of the most popular dietary supplements among women: calcium.

Older women, in particular, have been sold on the idea that they must take calcium pills to prevent osteoporosis. The message has apparently gotten through. The CDC study found that the percentage of women aged 60 and older taking calcium supplements jumped from 28 percent in 1988-1994 to 61 percent in 2003-2006.

Calcium and heart disease
I thought of that statistic when I read a study published online Tuesday in BMJ (formerly known as the British Medical Journal). This study, from a team of New Zealand researchers, reexamined data from a large (16,718) group of postmenopausal women who had been randomly assigned to take either calcium and vitamin D or a placebo as part of the U.S. government-sponsored Women’s Health Initiative (WHI).

The WHI study had originally found no increased risk associated with taking calcium and vitamin D supplements. However, it turned out that many of the women in the study had taken extra calcium supplements on the side. The New Zealand researchers eliminated those women from their calculations.

So, looking only at data from the WHI women who took the supplements (or placebo) assigned to them, the researchers found that women given calcium and vitamin D supplements had a 13 to 20 percent increased relative risk of developing a cardiovascular problem, particularly a heart attack.

The risk was significant, but modest, as can be seen in the actual numbers. Of the 16,718 women, 296 had heart attacks during the seven years of the WHI trial. Of those, 166 were taking calcium supplements and 130 were taking a placebo. That’s 36 more heart attacks in the calcium group.

The researchers note that they also looked at data from 13 other, unpublished trials involving some 29,000 women, including some in which the women took only calcium (no vitamin D). They found a similar increased relative risk among supplement takers: 25 to 30 percent for heart attacks and 15 to 20 percent for stroke.

Again, those are modest rises in risk. But as the authors of the study point out, “because of the widespread use of calcium supplements either alone or with vitamin D, even small increases in cardiovascular disease incidence may translate to a substantial population burden of disease, particularly in older age groups.”

They claim that their findings — and those from earlier research — indicate that the “treatment of 1,000 people with calcium for five years would cause an additional 14 myocardial infarctions, 10 strokes, and 13 deaths, and prevent 26 fractures.”

Disagreement continues
Not all experts agree that calcium supplements with or without vitamin D pose a cardiovascular danger, and several questions have been raised about this study’s methodology, especially the selection of the data sets.

But, as Dr. Harlan Krumhotz from the Yale University School of Medicine told MedPage reporter Chris Kaiser: “The paper presents a persuasive case that the calcium supplements could be a problem. … The relative risk is on the order of what was found for Vioxx [the controversial arthritis drug] — the absolute rates are low so that the vast majority do not have events. Because it is not a straightforward analysis, it should be considered more exploratory, and should prompt other studies to investigate whether these results can be replicated.

“The question for any person is how important is it for them to take the supplements,” he added. “The assumption should not be that they can’t hurt and might help. We should all want strong evidence of benefit and assurance of safety before making choices to take supplements. And in this case, part of this paper uses a limited dataset of a U.S. government funded study. The NIH should replicate these findings with the full dataset so that it is clear that it reflects accurately what the study shows.”