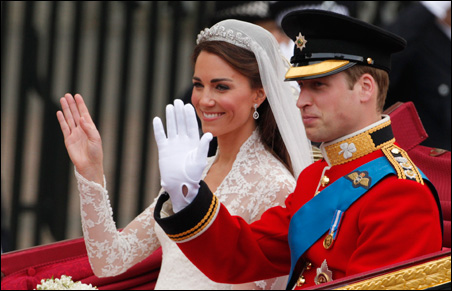 REUTERS/Phil Noble
Prince William and Catherine, Duchess of Cambridge, both have degrees from Scotland’s University of St. Andrews.

With a royal marriage in the news today, I thought I’d pass on the findings of a recent study that sheds new light on why all of us — even the rich and famous — tend to choose spouses with similar levels of education.

As Danish economist Gustaf Bruze points out in the study, published Wednesday in the Journal of Human Capital, social scientists have known for a long time that men and women tend to “sort” themselves into marriages with people of similar educational achievements. In fact, it’s a phenomenon that appears to be increasing, particularly in Europe.

As Bruze also points out, such sorting has societal repercussions, for it can perpetuate class stratification and economic inequality. Research suggests that the more education a person has, the higher his or her lifetime earnings.

Of course, the question for social scientists has been this: Does this sorting by level of education reflect a desire on the part of individuals for more material wealth? Or do people choose partners with the same educational level because they want a spouse with similar interests, abilities and lifestyle?

A data set of famous actors
To help answer that question, Bruze decided to look at the marriages of 400 top film actors. He chose successful actors for several important reasons: Unlike the rest of us, they tend not to meet their spouses at school. Nor are they brought together — to make a movie, for example — because of their educational attainments.

In addition, there is no correlation between an actor’s professional success, including his or her earnings, and years of education.

So if top actors “sort” themselves into marriages with others of equal educational levels, then that selection would suggest that the reason has less to do with wanting to cement a financial future and more to do with finding someone with similar interests.

After eliminating actors for which he could find no educational data, Bruze ended up with 140 couples for his study. Many of these actors were married to other well-known actors or entertainers (singers, models, musicians), but some were also married to “regular” people.

The data also revealed that most of the actors (47 percent) had met their spouses while working. Only 7 percent of the couples had met at school. The other 45 percent had met via other means, such as through friends or at public events.

After crunching all the data, Bruze found that despite the lack of an association between their education and their professional success, the actors still tended to choose spouses with similar educational backgrounds.

Meaning for the common folk
What does this means for those of us who aren’t rich or famous?

First, the study suggests that we appear to have strong (and apparently unconscious) preferences for non-financial traits in our partners that are linked to education. Also, even if the role of schools and workplaces (which tend to congregate similarly educated people) as meeting places for future husbands and wives were to disappear, “we would still choose spouses with similar educational backgrounds,” says Bruze.

For the record: Today’s most famous wedded couple, Will and Kate, both graduated (together) from the University of St Andrews in Fife, Scotland.