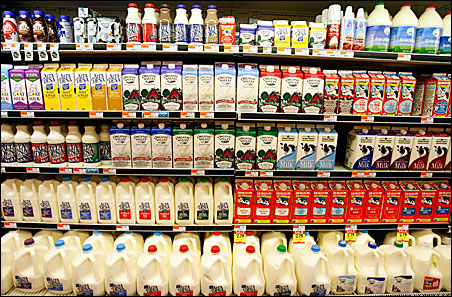 REUTERS/Lucy Nicholson
Not only will low-fat milk fail to trim your gut, it might even make you fatter than if you were to drink whole, according to one large study.

Trying to lose weight? If you think that opting for skim over whole milk is going to help, you may want to reconsider.

As Minnesota freelance journalist (and sometimes MinnPost contributer) Paul Scott explains in an article published in the May issue of Details magazine, skim milk may be actually putting your waistline — and your health — at risk.

Yes, whole milk contains more calories and dietary fat than skim (146 calories and 8 grams of fat per cup versus 83 calories and zero fat grams), but that’s beside the point, says Scott.

“[A]ccording to a 2007 report in the Archives of Internal Medicine, telling overweight and obese patients to cut calories led to only “transient” weight loss — it didn’t stay off,” he writes. “The same goes for cutting saturated fat. In 2003, the Cochrane Collaboration, a respected source for unbiased reviews of research, compared low-fat diets with low-calorie diets and found that ‘fat-restricted diets are no better than calorie-restricted diets in achieving long-term weight loss.’”

[i]t’s becoming widely accepted that fats actually curb your appetite, by triggering the release of the hormone cholecystokinin, which causes fullness. Fats also slow the release of sugar into your bloodstream, reducing the amount that can be stored as fat.

In other words, the more fat in your milk, the less fat around your waist. Not only will low-fat milk fail to trim your gut, it might even make you fatter than if you were to drink whole, according to one large study. In 2005, researchers from the Harvard School of Public Health and other institutions studied the weight and milk consumption of 12,829 kids ages 9 to 14 from across the country. “Contrary to our hypothesis,” they reported, “skim and 1% milk were associated with weight gain, but dairy fat was not.”

Nor is whole milk necessarily bad for your cholesterol levels and, therefore, for your heart.

“LDL [low-density lipoprotein cholesterol — the so-called “bad” one] comes in at least four varieties, and only the smallest and densest of them are linked with heart disease,” writes Scott. “Dairy fat, it turns out, affects only the large, fluffy kind of LDL — the benign kind.”

And then there’s the little-known fact that some milk manufacturers fortify their skim milk with powdered milk. The process of producing powdered milk oxidizes the cholesterol in it, reports Scott, and animal studies suggest that oxidized cholesterol may contribute to the forming of arterial plaque.

Plaque, of course, is the very stuff that can block arteries and lead to heart attacks and strokes.

You can read Scott’s article here.

The argument against skim milk