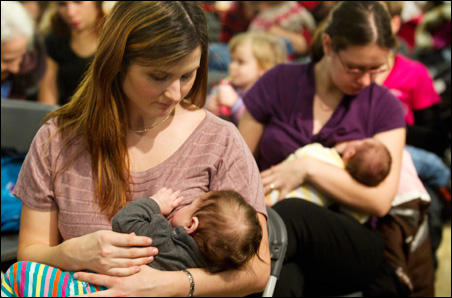 REUTERS/Christinne Muschi
A study found that abnormal scores (indications of behavioral problems) were more common in bottle-fed children than in those who were breastfed for at least four months.

That’s how a widely distributed online CBS news story opened its report Tuesday on a just-published British study that examined — and found — an association between bottle feeding and behavioral problems in children.

Talk about making mothers (in this case, non-breastfeeding ones) feel guilty. After describing the study’s findings, the CBS reporter does, near the end of his article, provide a reassuring quote from a British midwife and breast-feeding expert: “We must not send a negative message to mothers that they have failed, or make them feel guilty because they bottle-feed their babies.”

The reporter, though, seems to have missed the midwife’s point. “Moms who bottle-feed,” he writes, “may get the message in another way — via their kids’ bratty behavior.”

Yikes! So, if you don’t breastfeed your baby, your child will turn into a brat?

That’s a big leap to make from this one study.  For although its findings are interesting, they come with some considerable caveats.

What the study looked at and found
The new study, published this week in the Archives of Disease in Childhood, examined data from 10,037 mother/child pairs who are part of the large British study called the Millennium Cohort Study. All the families were white, and the children were all born in 2000 or 2001.

Of the 9,525 full-term babies in that data group, some 29 percent had been breastfed for at least four months. That breastfed percentage was only slightly lower — 21 percent — for the 512 babies who had been born prematurely.

When the children were 5 years old, the parents (mostly mothers) filled out a questionnaire designed to identify potential behavior problems, including emotional ones (such as clinginess and anxiety), “conduct” ones (lying and stealing), and hyperactivity.

The study found that abnormal scores on the questionnaire (indications of behavioral problems) were more common in bottle-fed children (16 percent) than in those who were breastfed for at least four months (6 percent).

The association was less clear among the premature babies than among the full-term ones, however.

These findings held even when the researchers adjusted for the mother’s age, economic status, education, and mental health, as well as for whether she smoked or drank alcohol during pregnancy and even factors related to childcare.

Possible reasons?
This isn’t the first study to report an association between breastfeeding and behavior in children. But it’s important to point out that not all studies have found such a link.

Why would breastfed children be better behaved? The current study’s authors offer a couple of explanations: 1) Breastmilk contains long-chain polyunsaturated fatty acids, growth factors and hormones that may help with brain development. 2) Breastfeeding may lead to more mother-baby interaction, which, in turn, may result in less disruptive child behavior.

Many formulas are now supplemented with fatty acids, but whether this supplementation is as effective as what’s provided in breastmilk “is unclear,” say the study’s authors.

Caveats
Now for the big caveats — and for why this study doesn’t prove that non-breastfed babies tend to be “brattier.” This study is an observational one, which means it can show only an association between two things, not a cause-and-effect. Other unidentified factors may have influenced the breastfed babies’ later behavior patterns.

For example (and as the authors point out), only 29 percent of infants born in England in 2000 were breastfed for four or more months. These babies may be raised in families that have a different parenting style than families that give their babies formula.

In addition, the children’s parents self-reported all the data in the study — including the information on their child’s behavior. Perhaps mothers who breastfeed are less likely to see a particular behavior as a problem than mothers who bottle-feed.

In any event, I’m with the British midwife. The evidence from many sources suggests that breastmilk has health advantages for both mother and baby. But it’s not the sole determinant of a child’s behavioral traits!

There are many reasons why women are unable to breastfeed their babies (including lack of societal support) — and they shouldn’t be made to feel guilty for their choice.