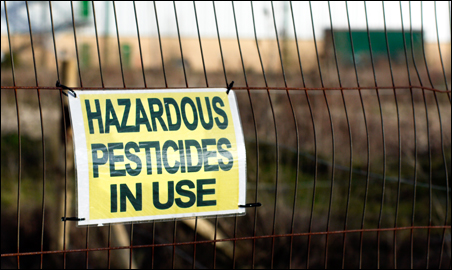 One study, involving 392 mothers and their children who lived on or near California farms, found that “every tenfold increase in measures of organophosphates detected during a mother’s pregnancy corresponded to a 5.5 drop in overall IQ in the 7-year-olds.”

Those findings held even after the researchers adjusted for such factors as family income and education.

But it isn’t just farm workers and their children who are at risk. The other two studies involved urban New Yorkers, and had similar results. One measured the amount of a once-popular home bug killer called chlorpyrifos in the umbilical cord blood of 265 low-income infants. The study found that high blood levels of the pesticides were associated with lower IQ and working memory scores when the children were tested seven years later. (Chlorpyrifos is now banned from residential use, but it’s still used on food crops.)

Interestingly, the other New York study, which involved 400 women and their children, found that the mothers of children who exhibited the greatest IQ deficits associated with organophosphate exposure tended to have a gene variant that makes it more difficult for their bodies to break down the pesticides.

The findings from all these studies are, of course, troubling. For more background on the issue of prenatal pesticide exposure and the brain development of children — and on what parents can do to minimize their children’s exposure — I  spoke last week with Dr. David Wallinga, director of the food and health program at the Minneapolis-based Institute for Agriculture and Trade Policy.

MinnPost: Are you surprised by anything in the findings of these three new studies?

David Wallinga: No. This was a confirmation and sort of a fine-tuning of the direction that the research findings have been coming for the last several years.

MP: How do these studies build on previous research?

DW: I would say in several respects. One: We’ve known for a long time that organophosphates are among the most toxic and therefore biggest threats to public health among the pesticides that are still widely in use. These studies just reaffirm that. Two: There is a huge variety of potential health outcomes from these early-life exposures to pesticides, whether organophosphates or otherwise. Typically, an individual study only looks at one outcome. So it’s taken 30 years to get a fuller understanding of how many different ways these pesticide exposures can actually harm. IQ is just the latest thing to be measured. We’ve known, for example, that organophosphates can help shrink the head circumference of babies exposed in utero. We’ve also known that organophosphates poison a fair number of people each year. I could just go down the list.

DW: Well, the brain is an integrator of all sorts of different functions. We, as humans, have gotten smarter and smarter over time at measuring the myriad different ways that toxins like organophosphates can interrupt brain development. But our smarts are only just now catching up with our usage. That’s one of the pitfalls of proving something and then waiting 40 or 50 years to really assess the damage. You’re always playing catch-up. So the general trend is that these things become more and more toxic over time — in other words, they have more and more toxic effects — and it becomes apparent these effects occur at what we now appreciate to be lower and lower levels of exposure. In other words, as we get smarter, we learn more and more about just how sensitive the brain is to these early-life exposures.

MP: What are the keys methods of prenatal exposure?

DW: It depends on which study you’re looking at. Since the Food Quality Protection Act was passed by Congress in 1996, organophosphates have been among the chemicals getting the greatest scrutiny by the EPA [Environmental Protection Agency]. That’s 15 years ago now, and I’ve been working on these issues the entire time.  So I was there in 1996 when EPA was just starting. And I’ve got to tell you that at that point their methods were pretty crude. During the first phase, they said, “Gee, these things are a lot more toxic than we thought. We’d better make sure people aren’t as exposed to them.” So what eventually happened at the turn of the millennium is that EPA got rid of all the residential uses of organophosphates.

DW: Well, people were using chlorpyrifos for termites in houses, for example, and people would get really high exposures that would go on and on and on. Fortunately, some of those uses were gotten rid of, but what remained were the uses on crops. As you see from [one of the three recent studies], that means that farm workers and their families continue to have dangerous exposures. It also means that there are residues on food. University of Washington [researchers] measured the byproducts of organophosphates in children’s urine. [They found that] when you put them on an organic diet, i.e., no pesticides, those byproducts disappear. When they go back to a conventional fruit and vegetable diet, the organophosphate byproducts reappear in their urine. So kids who are eating a diet of conventional fruits and vegetables are being exposed to these same chemicals through their diet.

MP: And we don’t know what’s a safe level for children, right?

DW:  Yes. The brain is exquisitely sensitive to these things, and our current methods of assessing the impact of those exposures are imperfect. It gets better over time, but it’s still pretty imperfect.

MP: What do you recommend that expectant mothers do to minimize their exposure to organophosphates?

DW: The easy one, of course — if you’re not a farm worker — is to modify your diet to find fruits and vegetables raised without pesticides, [particularly] for those fruits and vegetables that are commonly contaminated with one or more pesticides. We’ve got a produce fact sheet [that lists the most commonly contaminated produce] on our website. But I don’t know why we put the onus on parents if these things are toxic to the brain. That doesn’t make any sense. We didn’t pass the No Child Left Behind Act and say that, you know, it’s up to parents to test kids. The federal government said, “We’re going to set the standards.” It ought to be the same with pesticide use. In other words, we shouldn’t be using these things. It’s very clear they are extremely toxic to brain development, and they shouldn’t be used. Period. There are other alternative products, and we’ve been calling for 15 years for these things to be phased out.  What parents can do, which is extremely powerful, is write a letter to their elected officials saying, “We’re very worried about this. The science is pretty clear. The best exposure is no exposure to these kinds of chemicals, and they shouldn’t be used anymore.”

MP: Are there ways — other than through food — that people can become exposed to organophosphates in their homes today?

DW: No. They’re largely out of residential use. But you have to put a huge caveat on that. What if you live in a subdivision that happens to be adjacent to a field? We know that these things drift on the wind. What if your kid is playing in a field and tracks the residue into the house on their shoes? That’s very common. So you can’t draw these bright lines and pretend that just because it’s used on farms it never reaches the household. That’s not true.

DW: No. Not the organophosphates. Other worrisome things are used, but not them.

MP: Because of the sheer number of studies coming out now that are linking pesticides with brain toxicity, do you see our attitudes about the use of these chemicals changing? Or is the resistance just as strong?

DW: Well, the resistance is strong. Things are changing at a glacial pace. Unfortunately, pesticide use keeps marching upward. There are over 900 approved pesticides, and organophosphates account for maybe 30 of those. So we can’t test our way out of the problem. We approved 900 pesticides with comparatively little or no information about how they actually impact children’s development. The struggle just to get a few studies on the most toxic of those 900 pesticides has been monumental. So, I think if we wait for a few studies to dribble out every year, we’re going to be waiting until, well, the moon turns to cheese, I guess.  I think we need a new approach. The new approach is to start from the presumption that these pesticides are extremely toxic, generally speaking, or else they wouldn’t be used on pests. The default should be to not use pesticides wherever possible. Of course, there are alternative practices to all these things. There are both less toxic pesticides to use and there are also non-pesticide methods to addressing pest problems. You can grow a lawn without pesticides.

MP: So, if we got rid of organophosphates, we’d still have these 870 other pesticides to deal with?

DW: At least 870. More like 900-plus. The last time I looked there were 940 approved pesticides. So even without the organophosphates, we’re still exposed to dozens of pesticides on a daily basis. The Centers for Disease Control [and Prevention] tracks levels of pesticides, including many of the organophosphates, in blood and urine. We have data going back a dozen or more years from national surveys showing that a wide percentage of Americans are exposed to these things on probably a daily basis. So it’s not like it’s just a problem of the few. It’s a problem for all of us.

MP: Many people do assume pesticide exposure is a problem only for the poor.

DW: Or for farm workers. Or for farmers. But they don’t look at what their neighbor is doing on the lawn next door. I got exposed to pesticides at the University of Minnesota, walking around on the farm campus to a meeting. They were spraying right in the middle of the day, and I said, “What are you doing that for? You don’t have to spray in the middle of the day. You don’t have to spray at all.”

This interview has been condensed.