It was the kind of feel-good story we needed this past dreary winter: A 54-year-old man has a heart attack outside a grocery store in Goodhue, Minn., and is saved by the relentless resuscitation efforts of more than two dozen strangers.

He also achieves medical fame as the person who has gone the longest without a pulse — 96 minutes — and survived (neurologically intact) to tell the tale.

It was the human-interest aspect of the story — the kindness of all those strangers — that was most often emphasized during TV news reports about the incident. And with good reason. The fact that so many people took turns giving cardiopulmonary resuscitation (CPR) to Howard Snitzer, the man who collapsed from the heart attack, did save his life.

As anyone who has done CPR in a real-life situation can attest, responder fatigue sets in easily, which makes the CPR less effective. The American Heart Association recommends that rescuers rotate every two to three cycles. (One cycle is 30 compressions followed by two rescue breaths.)

But, as is almost always the case, there is more to this story, and it involves medical technology as well as human persistence.

Without the technology, the responders might have given up too soon.

Why they kept going
The full (but still pretty amazing) story appears as a case study in the June issue of Mayo Clinical Proceedings. Its lead author, Dr. Roger White, is an anesthesiologist and cardiac care specialist at the Mayo Clinic in Rochester. He was the physician on the phone with the Mayo Clinic medical transport helicopter crew that arrived in Goodhue on Jan. 5, 2011, some 34 minutes after receiving the 911 call regarding Snitzer’s heart attack. 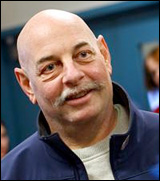 By then, Snitzer had been taken out of the cold and into a fire-hall garage across the street from the grocery store. He had been receiving continuous CPR from a team of trained first responders. He had also been given six shocks from an automated external defibrillator (AED), which one of those responders had brought to the scene.

But there was no pulse, and thus no way of knowing if the CPR was keeping Snitzer’s blood flowing. That’s where technology enters the story. The flight crew had brought along a relatively new piece of medical equipment: capnography. It measures the concentration of carbon dioxide at the end of each breath.

In other words, capnography can tell medical personnel if CPR is being effective — even when there is no pulse.

“It indicates that blood flow is either adequate or inadequate to very likely sustain the brain,” said White.

In Snitzer’s case, the capnography was telling White and the first responders to keep going, despite the lack of a pulse and the passing of the minutes.

Six more shocks
And so they did. The responders and Mayo’s paramedics continued to take turns with the CPR. They also, under White’s direction, administered six more shocks, this time using an advanced life support (ALS) defibrillator.

Because of the information they were receiving from the capnography — the evidence that blood flow was good — White was also able to tell the paramedics to give Snitzer a higher-than-usual second dose of epinephrine, a powerful drug that is used in emergency medicine to restore heart rhythm.

Amazingly — miraculously, you might say — Snitzer’s pulse returned. “I will concede,” White said, “that prior to that 12th shock, I had reached the point where I had nothing really left to offer. But I knew we had at least a slim chance.”

The Mayo flight crew transported the still-unconscious Snitzer to St. Mary’s Hospital in Rochester, where he was found to have a blocked artery. He underwent surgery and left the hospital 10 days later.

He had no signs of brain damage from his 96 pulse-less minutes.

The rest of the story …
So, it is true that a team of trained strangers saved Snitzer’s life. But it’s also true that a technological device gave those strangers the all-important encouragement to keep going, even when the situation seemed very grim.

“The rescuers were doing an excellent job,” said White. “They enabled us to keep trying to get rid of the [heart] rhythm that was keeping him in cardiac arrest.”

But also crucial to the story’s happy ending, he added, was “the fact that we were able to guide this very prolonged resuscitation with objective carbon dioxide measurements.”

White would like to see greater use of capnography in out-of-hospital emergency situations like the one in Goodhue — a recommendation that the American Heart Association also endorses.

We can take home another message from this incredible tale as well.

“The public should be reassured from an experience like this that if they witness cardiac arrest, they should move quickly to use chest compressions,” said White. “Just push hard and push fast because the experience that we describe tells us it can work if you do it well.”

As a very happy — and lucky — Howard Snitzer can attest.

Dr. Roger White from the Mayo Clinic discusses his article of a case of Howard Snitzer.