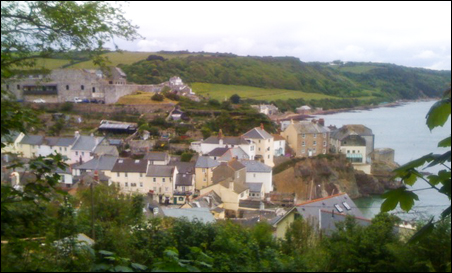 Barnes is not afraid of blood. He does not kick at stray dogs. And he is definitely not monosyllabic when being interviewed.

“Doc Martin,” which can be seen in the United States on PBS stations, is filmed in Port Isaac (called Portwenn in the TV series), a village on Cornwall’s northwestern coast.

“Port Isaac is similar-sized to [Cawsand/Kingsand],” says Barnes, “but this is perhaps more like what the ‘Doc Martin’ village is supposed to be.” It’s less commercial, he explains. For although Cawsand/Kingsand has its share of holiday homes, Port Isaac caters more to tourists — probably because of the TV series. 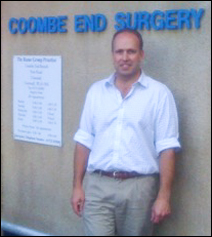 Almost all patients covered by National Health Service
Unlike the Doc Martin character, Barnes isn’t the sole doctor in his village. Nor is his practice as geographically limited as Dr. Ellingham’s. Barnes is one of five general practitioners who rotate between the Coombe End Surgery in Cawsand/Kingsand and two surgeries in the nearby town of Torpoint. Altogether, he and his colleagues provide medical services to about 10,000 people.

Almost all of Barnes’ patients (“99 percent,” he says) are covered by Britain’s government-run National Health Service. British holiday makers as well as local residents can therefore seek care at the clinic for free and without any need for referrals. The rest of Barnes’ patients tend to be holiday visitors from various European Union countries — who are also entitled to free care.

“You could come in here 360 days a year and it wouldn’t cost you any more,” Barnes says. As in the States, patients have to book appointments days or weeks ahead, although one of the Torpoint clinics has a physician whose appointments are kept open to handle walk-in patients.

Still makes house calls
When Barnes describes his day-to-day work at the Cawsand/Kingsand surgery, it sounds in some respects not only very similar to what is portrayed in “Doc Martin,” but also to descriptions of mid-20th century medicine in the U.S.

For example, Barnes still makes afternoon house calls  (called “home visits” in Britain) “for people who are housebound or too poorly to be coming out,” he says.

Because most of the streets of Cawsand/Kingsand are too narrow for cars, Barnes walks from appointment to appointment, carrying his large leather doctor’s bag — yes, just like on “Doc Martin.”  As he passes people on the steep streets, they’re likely to nod and say, “Hello, Doc.”

“That’s when you feel like you’re stepping back in time,” he says.

(For the record: I saw no roving band of giggling teenage girls in the village, nor any scruffy stray dogs.)

The unusual and the ordinary
Barnes, who began working on the Rame Peninsula 10 years ago, enjoys the variety of general practice medicine. “I have no clue what I’m going to be treating next until the patient walks through the door,” he says. “Anybody can come in. It could be someone who has trodden on a weever fish or fallen on the rocks [the Cornish coast is famously rugged] or needs ongoing management of a mild or moderate illness or …”

It’s a little English Channel fish with a poisonous dorsal fin that likes to hide under the sand, Barnes explains. Stepping on one can be “agony — really, really painful,” he adds. The treatment is simple (and very Doc Martinish): You must soak your foot in a bowl of very hot (just short of scalding) water. Within five minutes, the poison will be neutralized, and the pain will subside.

Although Barnes has, like Doc Martin, tended to the occasional freakish injury (such as removing a dinner fork lodged in a foot) much of his practice is taken up with chronic disease management — the ongoing care of patients with diabetes, for example, or heart disease.

Many of the families he cares for have lived on the Rame Peninsula for generations — and deaths in these families can be particular wrenching. “In a village like this you can see how many people are affected by the loss of people who are the real pillars of the community,” Barnes says.

A return to the West Country
Barnes did not grow up on the Rame Peninsula — but very nearby, in the city of Plymouth, located in the county of Devon, just a short ferry ride across the Tamar River estuary. He received his medical training at University College London, and then returned to the West Country (as southwestern England is sometimes called). He lives with his wife, who runs an art gallery, and his two children in the inland Rame village of Sheviock.

Barnes says he’s seen his workload intensify over the past decade as the demand for medical services has increased, due in large part, he believes, to new forms of treatment. “We have the same number of people, but more appointments,” he says.

Still, he enjoys his work — and is grateful for the support of the Cawsand/Kingsand community, which raises money from time to time to provide the surgery with special medical equipment or things like toys for the waiting room.

Barnes says it would be difficult to find a better place to raise a family.

He describes, for example, how on Friday afternoons during the summer, after the clinic has closed, his wife and children often meet him in Cawsand/Kingsand for a swim and then a meal of jacket potatoes from one of the village’s pubs.

“That’s the part when you think, ‘This is brilliant,’ ” he says.

That’s also the part when an observer might be forgiven for thinking that although Barnes is (thankfully) no Doc Martin, the charming village of Portwenn may not be all that fictional after all.

What it’s like to be a real-life ‘Doc Martin’