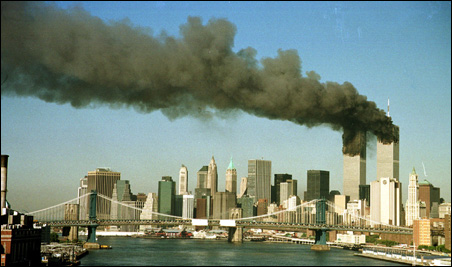 REUTERS/Brad Rickerby
Studies have shown that many people recall watching on TV as the first plane hit the north tower of the World Trade Center on Sept. 11. But that footage didn’t air until the following day.

We really can’t trust our memories.

No matter how sure we are of the details of our experience of a particular event — even a powerful “flashbulb” one like 9/11 — there is a good chance that those details didn’t actually happen in quite the way that we remember them.

For example, studies have shown that many people recall watching on TV as the first plane hit the north tower of the World Trade Center on Sept. 11. But that footage didn’t air until the following day.

The possible bio-neurological reasons for why our memories are so malleable are explored in a fascinating article in the May issue of Smithsonian magazine. Journalist Greg Miller focuses on what he calls “one of the most provocative ideas in all of neuroscience” — the idea that every time we remember something, that memory is altered.

The leading proponent of this memory “reconsolidation” theory is Karim Nader, a neuroscientist at McGill University in Montreal. In a series of experiments — most notably with rats — Nader has shown that each time a memory is re-filed in the brain, neurons makes new proteins to help store that memory.

This suggests, says Nader, that the memory has been rebuilt — in other words, that it’s essentially treated in the brain like a new memory.

As Miller points out, Nader’s research may have implications for the treatment of post-traumatic stress disorder (PTSD), a mental disorder that is often resistant to current therapies, which include drugs and psychotherapy. If memory reconsolidation is a reality, then researchers may be able to find ways to distort disturbing memories to make them weaker — and, thus, less haunting. Indeed, Miller describes research along this line that is already under way.

Still a theory
Of course, not everyone agrees with Nader’s interpretation of his research findings. The prevailing belief among neuroscientists continues to be that once a memory is constructed (consolidated) in the brain, it can’t be easily altered. The memory can fade, of course, but it basically remains unchanged.

Much more research will have to be done to determine who’s right on this issue. But as Miller points out, Nader’s studies do support some of the most famous work on memory ever done — that of University of California, Irvine psychologist Elizabeth Loftus:

In a classic 1978 study led by [Loftus], then at the University of Washington, researchers showed college students a series of color photographs depicting an accident in which a red Datsun car knocks down a pedestrian in a crosswalk. The students answered various questions, some of which were intentionally misleading. For instance, even though the photographs had shown the Datsun at a stop sign, the researchers asked some of the students, “Did another car pass the red Datsun while it was stopped at the yield sign?”

Later the researchers asked all the students what they had seen — a stop sign or yield sign? Students who’d been asked a misleading question were more likely to give an incorrect answer than the other students.

A way to keep us from reliving our past?
Why would our brains want to make memories so unreliable? That, says Miller, remains the big and as-yet unanswered question:

After all, if [our memories] were less subject to change we wouldn’t suffer the embarrassment of misremembering the details of an important conversation or a first date.

Then again, editing might be another way to learn from experience. If fond memories of an early love weren’t tempered by the knowledge of a disastrous breakup, or if recollections of difficult times weren’t offset by knowledge that things worked out in the end, we might not reap the benefits of these hard-earned life lessons. Perhaps it’s better if we can rewrite our memories every time we recall them. Nader suggests that reconsolidation may be the brain’s mechanism for recasting old memories in the light of everything that has happened since. In other words, it just might be what keeps us from living in the past.

You can read Miller’s article here.

Why we can’t trust even our most powerful memories