Last week, first lady Michelle Obama and Secretary of Agriculture Tom Vilsack unveiled a new, simple and brightly colored plate-shaped icon to replace the old, complex and tired-looking food pyramid. Despite two incarnations (1992 and 2005), the food pyramid was almost universally disliked by nutritionists and other health officials for being flawed and misleading.

“My Plate” has received a much more favorable reaction, primarily for two reasons: It has a clean and easy-to-grasp design and it clearly emphasizes the overwhelming importance of fruits and vegetables in a healthful diet. 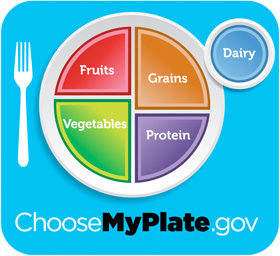 Most of the quibbling over the new icon centers on the “dairy” section, which is a small circle set off to the top right of the plate, apparently to bring to mind a glass of milk or a small container of yogurt. As some nutritionists point out, dairy foods are not essential to good health and, thus, should have been incorporated into the “protein” part of the plate.

Many food activists also charge that the “My Plate” icon doesn’t present a strong enough message about nutrient-stripped processed foods. For example, the text that accompanies the icon on the U.S.D.A. “My Plate” website nudges consumers to make “at least half your grains whole grains” rather than all of them.

Then there are those who believe that carbohydrates rather than fats are the main source of our modern epidemics of chronic health problems such as obesity, diabetes and heart disease. They would argue that the “grains” section is too prominent on the plate.

Will it change eating habits?
I personally think the new food plate is a strong step in the right direction. But whether it will change eating habits — mainly to consume more fruits and veggies  — is another thing. We’ll need stronger health messages and different agricultural policies to accomplish that.

Here are some initial reactions from others to the new graphic:

“I don’t think it goes far enough, but it’s certainly headed in the right direction. I think it’s actually pretty great. … This is trivial, but I hate the “protein” sector. I’m a nutritionist, and it’s a switch from food to nutrients, which is always a mistake — it’s just wrong. Grains and dairy, which have their own sectors, are a very important source of protein. They didn’t want to call it the meat group in part because the meat industry has really been trying to equate meat with protein, and they didn’t want to minimize meat and have smaller sectors for beans, poultry and fish. This is their way of doing an “eat less meat” move without actually saying it.” – Marion Nestle, professor of nutrition, food studies and public health at New York University, in an interview with Scientific American.

“USDA’s new healthy eating graphic is a huge improvement over the inscrutable food pyramid. While no one graphic can communicate every nuance of healthy eating, this easy-to-understand illustration will help people remember what their own plate should look like. It likely will shock most people into recognizing that they need to eat a heck of a lot more vegetables and fruits. Most people are eating about a quarter of a plate of fruits or vegetables, not a half a plate as recommended.” – Margo Wootan, nutrition policy director for the Centers for Science in the Public Interest (CSPI), in a press release.

“To make informed choices, people will need additional information. It really makes a difference whether the grains you eat are whole grains or refined grains. It makes a huge difference what kind of proteins are being consumed — to be healthy, we need to be replacing the meat with a mix of chicken, nuts and legumes. … [The dairy circle on the plate] implies there should be a glass of milk or some dairy at every meal and there’s no evidence to show that that’s beneficial.” – Dr. Walter Willett, chairman of the department of nutrition at Harvard University, in an interview with the Los Angeles Times.

‘Protein portion … is unnecessary’
“The protein portion of the USDA’s My Plate is unnecessary, because beans, whole grains, and vegetables are loaded with it. And it is a shame that MyPlate reserves a special place for dairy products, which are packed with fat and cholesterol and may increase the risk of health problems ranging from asthma to some types of cancer. There are many more healthful sources of calcium. But for taxpayers and members of Congress, the new plate has a special significance. There’s a stark contrast between the USDA’s plate and federal food subsidies. While the USDA’s plate encourages fruit and vegetable consumption and advises Americans to limit high-fat products like meat and cheese, federal agriculture subsidies do exactly the opposite: They spend billions of dollars promoting production of high-fat, high-calorie food products.” – Dr. Neal Barnard, president of the Physicians Committee for Responsible Medicine, in an online post on his organization’s website.

“Granted, the new stripped down graphic leaves out many important factors – how much salt is on that pork chop, fat in the broccoli casserole, or if your eat your meals with a serving fork and your plate is the size of a hubcap – but you can’t expect all of that info to make the cut. Simplicity is the idea, and I can see the merit in that. Considering that 75% of men and women between the ages of 17-24 are so out of shape that they can’t qualify for military service, some dumbing down may be in order.” – food journalist Jon Watson, writing on the “About Food and More” blog at the Atlanta Journal Constitution.

“The plate is the nutritional equivalent of shuffling deck chairs on the Titanic. Rather than fix the issues at hand with policies that promote health, the USDA chooses to distract us with colorful pictures and press releases that attempt to pass of tinsel as gold. … I don’t believe Americans are lacking knowledge or awareness that fruits and vegetables are healthy; the problem is that fruits and vegetables compete with artificially priced junk food in the marketplace. Lucky Charms and Trix are so cheap because they are made with crop subsidies; meat is cheap because cows are fed government-subsidized crops, and so on and so forth. Is My Plate suddenly going to make a pound of vegetables cost less, and a box of Lucky Charms cost more? Will My Plate turn food deserts into areas where residents can have access to healthy foods?  No.” – Andy Bellatti, food and nutrition activist and blogger (Small Bites).

For more information, go to the U.S.D.A. ChooseMyPlate.gov website. If you’re trying to improve your eating and exercise habits and/or lose weight, you may find the free, interactive “Food Tracker” tool particularly helpful (although, inexplicably, it’s still referred to as a “MyPyramid Tracker” on some pages).

Is ‘My Plate’ better than the old food pyramid?