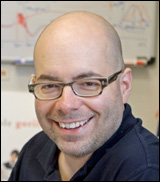 Research has shown that we put too much trust in the accuracy of our memories.

Now it’s showing us that we’re also too confident about our ability to be aware of our surroundings.

At least, that’s the finding from a new study led by psychologist Christopher Chabris of Union College in Schenectady, N.Y.  And it has real-world implications. Other studies have found, for example, that people who talk on the telephone while driving (yes, including on hands-free devices) ignore road hazards even though they insist they aren’t being distracted by the phone conversation.

And then there’s the case of the Boston police officer who went to jail in 1998 because a jury didn’t believe his story that as he was running after a murder suspect he didn’t see other officers beating up a man they had mistaken as the suspect (but who was actually an undercover black cop).

Chabris’ study, which was published earlier this month in the open-access online journal i-Perception, was designed to simulate what happened that night in Boston.

In the new investigation, students jogged 9 meters behind a runner on a 400-meter path while counting how often the runner touched his head. Along the way, two men shouted, grunted and pretended to beat up a third man in a driveway 8 meters off the path.

At night on a lighted path — a situation faced by the Boston police officer — about one-third of chasers reported seeing the fight and recalled details of the beating. In separate runs during the day, 56 percent of volunteers saw the fight, which remained visible for about 30 seconds.

That figure fell to 42 percent among the daytime participants given the tougher task of separately counting each time the runner used his left or right hand to touch his head. Almost three-quarters of the daytime volunteers who didn’t count head touches at all — and thus could devote more attention to their surroundings — noticed the faux fight.

Chabris and his colleagues refer to this phenomenon as inattentional blindness — “the failure to see visible and otherwise salient events when one is paying attention to something else.” They also use the term illusion of attention — “the common but mistaken belief that people pay attention to, and notice, more of their visual world than they actually do.”

Think you would be more attentive than those students to your surroundings? Try Chabris’ now-famous basketball-tossing attention test.