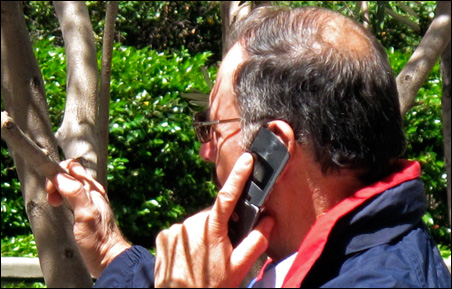 REUTERS/Fred Prouser
Complicating the issue is the fact that almost all the studies that have shown no or minimal health risks from cell phones have been funded by industry.

Health concerns about cell phones climbed a notch yesterday when the International Agency for Research on Cancer (IARC), a working group of scientists convened by the World Health Organization, announced [PDF] that the devices’ radio frequency electromagnetic fields are “possibly carcinogenic to humans.”

As the New York Times and others have reported, that decision puts cells phones in the same IARC category as certain dry cleaning chemicals and pesticides — as well as pickles and coffee.

Frankly, it’s difficult to know what to make of the IARC announcement — or the ongoing controversy about cell phones and health risks, particularly the risk of developing malignant brain tumors called gliomas.

Feelings on both sides of the issue are highly charged. But good, solid, unbiased evidence on this topic remains scarce.

A broad review of existing studies
In the press release it issued yesterday, the IARC did not quantitate the possible health risks associated with cell phones. It did, however, cite last year’s finding from the controversial Interphone study that heavy phone use (defined in the study as an average of 30 minutes daily for a period of 10 years) was associated with a 40 percent increased relative risk of developing a glioma.

(Some background: The large and multination Interphone study looked at cell-phone usage prior to 2005, so, yes, its definition of heavy use would be considered laughable by today’s standards. Also, even if that 40 percent increased relative risk is correct, the individual, or absolute, risk of developing a glioma is small, for these brains tumors are relatively rare.)

Interphone wasn’t the only study examined by the IARC panel, which included 31 scientists from 14 countries. They said they reviewed hundreds of other papers, including, presumably (they haven’t published their full report yet), a study published earlier this year that found using a cell phone for 50 minutes increases activity in areas of the brain closest to the phone’s antenna. That finding is important because it offers (but does not prove) a possible biological mechanism by which cell phones may detrimentally affect the brain.

Interestingly, the IARC panel also reviewed several in-press (but not yet published) articles that take a closer look at data from the Interphone study. By mentioning these articles in their press release, the IARC seems to be suggesting that the findings will be negative toward cell phones. But, of course, we won’t know that until those articles — and the IARC report — are published.

No definitive answers yet
If you’re feeling confused about this issue, you’re not the only one. Almost every study about cell phones and health risks has stirred controversy. The Interphone study, which was launched in the late 1990s, was supposed to offer some definitive results, but scientists continue to squabble about its findings.

There’s a lot at stake, of course — billions of dollars for the cell-phone industry and a fun and increasing essential gadget for consumers.

Complicating the issue is the fact that almost all the studies that have shown no or minimal health risks from cell phones have been funded by industry.

Conflicts of interest have even crept into so-called independent scientific groups looking into this issue — including the IARC. As Microwave News blogger Lou Slesin has reported, the IARC removed one of its members two weeks ago after learning that he was a director of a consulting group (owned by his brother) that lobbies on telecom issues — a conflict the man had apparently failed to report even though WHO requires such disclosures of all individuals involved in cancer assessments.

A watershed moment?
On the CNN website yesterday, producer Kevin Voight asked, “Could the WHO’s announcement be a watershed moment such as the 1964 U.S. Surgeon General’s report on the cancer risk of smoking?”

I doubt it. We simply don’t have enough information yet.

“It is important that additional research be conducted into the long‐term, heavy use of mobile phones,” said IARC Director Christopher Wild in yesterday’s press release. “Pending the availability of such information, it is important to take pragmatic measures to reduce exposure such as hands‐free devices or texting.”