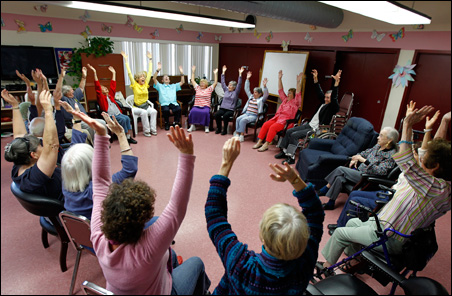 REUTERS/Mike Blake
Studies show people who report being the most physically active have slower cognitive decline than their sedentary peers.

Two new studies add to the growing evidence that regular physical activity — even 30 minutes of daily walking — may help protect the brain from cognitive decline and dementia in old age.

The studies, published online Tuesday in the Archives of Internal Medicine, took unique approaches to examining the link between physical activity and the aging brain. What they found makes the argument for regular exercise even stronger.

Study No. 1
Most previous studies on exercise and cognitive decline have involved healthy people. But the 2,809 women (aged 65 and older) who participated in one of Tuesday’s new studies were not healthy. They had either a personal history of heart disease or stroke and/or three risk factors for those conditions, such as diabetes, high blood pressure and being overweight.

Such risk factors have also been linked to cognitive decline in old age.

The women filled out questionnaires about their exercise habits and were given periodic cognitive tests over the telephone during a period of four to seven years. (Interestingly, according to an editorial that accompanies the studies, these “rather crude” tests were originally developed by insurance companies to screen out applicants for long-term care insurance who might have dementia.)

The study found that women who reported being the most physically active — those who got the equivalent of 30 minutes of brisk walking daily — experienced a “substantially” slower cognitive decline than their sedentary peers.

In fact, noted the study’s authors, those women were “cognitively equivalent to being 5 to 7 years younger.”

Study No. 2
Of course, self-reports of physical activity (or any other lifestyle habits) can be very misleading, a problem that the second, much smaller study attempted to address. It recruited 197 healthy men and women in their 70s to come into a laboratory over a two-week period and have their total energy expenditure objectively measured using a technique called “doubly-labeled water.”

Make exercise a habit
The two studies are especially noteworthy given other research published earlier this year that showed that aerobic exercise increases the size of the anterior hippocampus, leading to improved spatial memory, according to a commentary that accompanied the studies.

Of course, these recent studies have, like all studies, their limitations. Most notably, they are observational studies, which means they can’t prove that one thing (exercise) causes another (lower rate of cognitive decline). They can show only an association between the two. Still, exercise is free and associated with many other health benefits, so why not get moving?