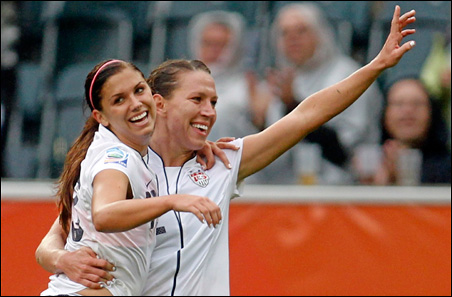 With the remarkable U.S. women’s soccer team playing Japan in the World Cup finals on Sunday, I thought I’d highlight new research that has uncovered an intriguing (and, yes, I admit it, an amusing) difference between top female players and their male counterparts.

The female players are less likely to fake injuries on the field. About half as likely, according to a study published this month in the journal Research in Sports Medicine.

That’s right. The women are less likely to play-act and writhe about in simulated pain in order to deceive the referee into giving them a free kick or their tackler a yellow card.

Apparently, faking injuries has become a major problem in professional soccer. In 2008, the International Federation of Association Football (FIFA) called for “the football family to unite in denouncing injury simulation and working to eradicate this scourge from the game.”

But that scourge seems to greater among the guys, according to studies led by Dr. Daryl Rosenbaum, an assistant professor of family and community medicine at Wake Forest Baptist Medical Center in North Carolina. Last year, Rosenbaum and his colleagues reported that only 7.2 percent of apparent injuries in international men’s tournaments were “definite” injuries — ones in which the player was visibly bleeding and/or had to withdraw from the game within five minutes of the injury.

The latest study found that women also faked a lot of injuries in international tournaments, but not as many as the men. Some 13.7 percent of their apparent injuries turned out to be the real thing.

“So it looks like there may be some simulation in the women’s game,” Rosenbaum told Inside Science reporter Peter Gwynne. “But this study shows that women are less likely than men to fake soccer injuries.”

Why the gender difference?

“Men are bigger and faster and playing on the same size field as women, so they experience more contact that can cause immediate contusions but do not require a player to withdraw,” Rosenbaum told Gwynne.

But he also acknowledged another, more cynical possible explanation for the gender difference. “The pressures and the money at stake in the men’s game are so much higher. Desperate times call for desperate measures,” he said.

Players of both genders may want to take note, however, of another finding from Rosenbaum’s research: There was no evidence that teams who frequently fake injuries win more games.