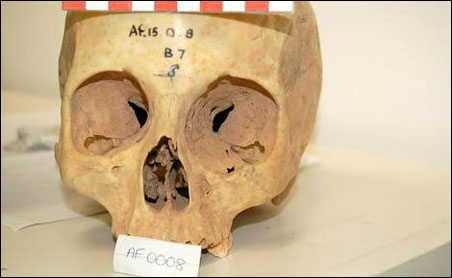 Courtesy of University of Oxford
Researchers measured the brain cavity and eye socket sizes of 55 skulls dating back to the 1800’s from museums in Oxford and Cambridge, England.

Humans living at higher latitudes tend to have bigger brains — and bigger eyes — than those living closer to the Equator, according to a new British study.

The researchers speculate that these differences are because humans need larger eyes and more brainpower to deal with the lower light levels at higher latitudes, particularly during the long, dark winters.

But before you Minnesotans with Scandinavian roots get too, um, big-headed about these findings, you should also be aware of something else the authors of this new study emphasize:

Having a bigger brain doesn’t make a person smarter.

Study details
For this study, which appears in the journal Biology Letters, researchers measured the brain cavity and eye socket sizes of 55 skulls from museums in Oxford and Cambridge, England. The skulls dated back to the 1800s and represented different indigenous populations from 12 different areas of the world (England, the United States, Australia, Kenya, Micronesia, Scandinavia, Somalia, Uganda, Canary Islands, China, India and France).

The researchers found a “significant positive relationship” between the latitude of where the skull came from and the size of both the brain and eye cavities, even after adjusting for confounding factors, such as the fact that humans living in higher latitudes tend to be physically larger than those living closer to the equator.

The Scandinavian skulls in the study had the largest brains and eye sockets. Those from Micronesia had the smallest.

Similar examples in nature
As the researchers point out in their study’s background information, a link between ambient light and the eye size of birds is already well established: Those bird species that are the first to sing at the crack of dawn tend to have larger eyes than those who do their warbling a bit later.

Scientists have also discovered that non-human primates that have large brains for their body size also have relatively expanded visual brain areas.

So perhaps it’s not surprising that evolution may have also given high-latitude humans larger brains to expand their visual neurons so they could cope with the dim light of numerous cloudy days and long winters.