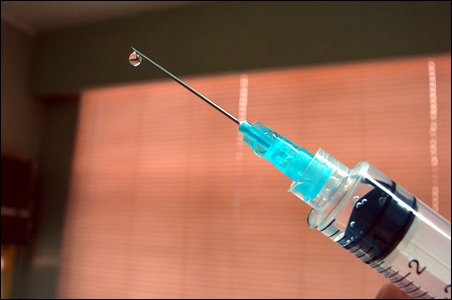 Creative Commons/ZaldyImg
Many childhood diseases that vaccines had once almost eradicated in the United States have made comebacks in recent years as an increasing number of parents reject the vaccines for their children, mostly due to fears of autism.

An analysis by the Institute of Medicine (IOM) of more than 1,000 scientific articles has found that common vaccines cause few health problems.

Furthermore, most of the side effects that were found to be associated with the vaccines tended to be rare.

“We have a lot of evidence that vaccines save lives and avert a lot of suffering,” said Dr. Ellen Wright Clayton, chair of the 16-member IOM committee that wrote the report, in a phone-in press briefing on Thursday. “The side effects we’re talking about here are relatively rare because it’s hard to find them when you look at a general population. The majority of the ones we found are either short-term or readily treated.”

Nor did it find evidence that the flu vaccine causes Bell’s palsy or exacerbates asthma symptoms.

The committee did find convincing evidence of the following, however:

An exhaustive review
The 647-page report is the most thorough review of vaccine-related scientific literature in almost 20 years. It was commissioned in 2009 by the Department of Health and Human Services to help it administer the Vaccine Injury Compensation Program (VICP), which provides compensation to people injured by vaccines.

Clayton, a professor of pediatrics at Vanderbilt University in Nashville, Tenn., said she hoped the report would also help to allay any fears that parents may have about vaccinating their children.

Although the report wasn’t specifically written for parents,  “we had parents in mind every single step of the way,” she said.

Won’t convince everyone
Dr. Gregory Poland, director of the Vaccine Research Group at the Mayo Clinic in Rochester, Minn., welcomes the report, which he said contained no surprises. “It was a rigorous process, and I think it should be very reassuring to the public,” he said in a phone interview Thursday.

Still, he added, it’s unlikely that this report, as exhaustive as it is, will convince vaccine skeptics that the benefits of vaccines far outweigh the risks.

Indeed, the first question asked during Thursday’s press conference was whether Clayton and the other IOM committee members thought parents who believe their children’s autism was caused by a vaccine were “dishonest or stupid.”

It was asked by a media representative from the Age of Autism, an advocacy group that believes that the government and the medical community are ignoring or covering up the link between vaccines and autism.

(No, Clayton told the questioner, “I am not about to say that people are dishonest or stupid.”)

“The anti-vaccine people in particular will not understand or accept the methods used in this study,” said Poland. “So they will misinterpret the findings.

“They have formed a belief, and there are no data that will legitimately challenge that belief,” he added. “They would have accepted hands down, no questions asked, a report that substantiated their beliefs, but they are unwilling to accept a report that repudiates their beliefs.”

Deadly diseases are making a comeback
That unwillingness to accept the data has “directly and in a quantitative manner harmed children and has led to the deaths and disability of children,” Poland said.

Many childhood diseases that vaccines had once almost eradicated in the United States have made comebacks in recent years as an increasing number of parents reject the vaccines for their children, mostly due to fears of autism. Minnesota, for example, experienced a measles epidemic earlier this year that hospitalized several children.

Before the measles vaccine was developed, some 450 children died each year in the United States and another 1,000 suffered deafness or permanent brain damage from measles complications, according to the Centers for Disease Control and Prevention.

“People forget what these diseases are like,” said Clayton during Thursday’s press conference. “When I was a resident, I had a child in the hospital with tetanus. You don’t want that to happen.”

“One of the things that needs to be said to put this in perspective is that a lot of the diseases that these particular vaccines prevent are really bad,” she added. “…Vaccines are a victim of their own success in this regard.”

You can read the full IOM report or a six-page summary at the institute’s website.