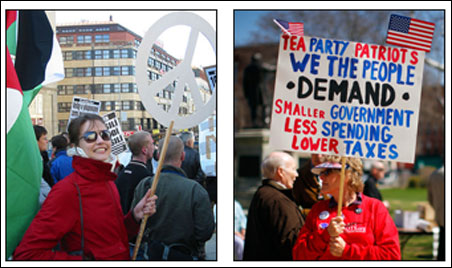 As noted in a Scientific American article published online Tuesday (and as I have mentioned from time to time here in Second Opinion), the last decade has seen an explosion of research into the psychological underpinnings of the ideological differences between liberals and conservatives.

It seems a particularly relevant area of research, given the rancorous state of our politics this summer.

In general, according to the research, conservatives tend to look upon the world through a more negative lens. They are more fearful of threats and losses, less tolerant of ambiguity, and more likely to develop punitive judgments about individuals who violate society’s norms, the research suggests.

Liberals, on the other hand, tend to be more open to new experiences, more accepting of change, and more egalitarian in their attitudes toward others, according to the research.

Nonpolitical attitudes differ, too
In Tuesday’s Scientific American article, journalist Sarah Estes Graham and University of Southern California assistant professor of psychology Jesse Graham focus on two studies published earlier this year by researchers at Virginia Commonwealth University. These studies are particularly significant because they found that even attitudes about nonpolitical matters are formed differently in liberals and conservatives.

Here’s the Grahams’ description of the studies:

[S]tudents were presented with a conditioning task involving positive or negative images (like puppies and garbage) flashed before pictures of Chinese characters. The characters were totally new and value-neutral for these non-Chinese speaking students. Some characters always followed the cheery puppies and rainbows, while some always appeared after the aversive sewage and spiders. Another set came after a neutral gray square.

After a few viewing cycles, the students simply rated how much they liked or disliked each of the Chinese characters. … Both studies showed that the negative images had a stronger effect than positive images for everyone, supporting the robust psychological finding that negatives make a stronger impression than positives (i.e. the snarky evaluations you remember long after the glowing ones have faded). After the brief viewing, Chinese characters that had appeared after negative images were more disliked than the other Chinese characters, even though participants had no prior experience with them.

Most strikingly, both studies showed that this negativity dominance was especially true for conservative students. In other words, those on the political right showed more of a “bad is stronger than good” bias than those on the left.

But — and this was a surprise — the differences between the two political groups didn’t come from the negative images, but from the positive ones.

The positive images made a stronger impression on the liberal students than on the conservative ones.

How might this difference express itself? “[I]f viewing two hypothetical television ads — one featuring an impoverished village in shambles  after a failed food distribution program, and one showing clean, happy children after a successful well installation — liberals may be more likely to be convinced of the potential success of future aid programs,” write the Grahams.

Unconscious attitudes
These studies stand out for two reasons, as the Grahams point out. The attitudes being formed in them had nothing to do with politics or government or even moral values. Nor were the attitudes formed consciously. (The liberal and conservative students gave similar ratings for how much they liked the pictures of puppies and garbage.)

“The paper is one more indication that liberals and conservatives differ in ways unrelated to politics — and in ways they may not even be aware of,” they write.

“But like many of the findings about ideology,” they add, “this finding can be spun different ways: if you want to flatter the left, you can say it shows them as less biased, less cynical, and more open to a positive worldview. If you want to flatter the right, you can say this shows conservatives as more cautious, less pie-in-the-sky, and even more sensible (if you think negative information should have more of an impact).”

It all depends on your attitude.