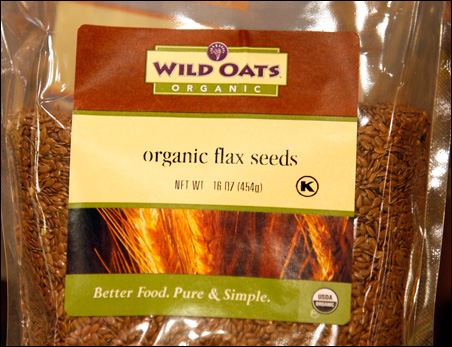 REUTERS/Lucy Nicholson
A recent New York Times article implied since flaxseed and other alternative treatments have been found to be no better than placebo in relieving hot flashes, women should reconsider hormone therapy.

I’ve written here many times before that despite all the studies linking it to serious health risks, menopausal hormone therapy is not going to go gently into the night. Too much money is at stake.

Still, I was surprised and dismayed to read an article in the New York Times Monday that seemed to be saying, well, since soy, black cohosh, flaxseed and other alternative treatments for menopause have been found in recent studies to be no better than placebo in relieving menopausal hot flashes, women should reconsider hormone therapy.

This is the same hormone therapy that has been shown repeatedly to raise the risk of blood clots, stroke, breast cancer, colon cancer, incontinence, dementia and gall bladder disease.

But the doctors quoted in the Times piece seem to think that those risks are worth it for many women. After all, says one doctor, women are willing to take migraine medications despite their side effects, so why not take hormones for hot flashes?

Correct me if I’m wrong, MinnPost readers, but I don’t recall any studies that show that migraine drugs raise a woman’s risk of cancer or stroke.

Another doctor tells the Times that “scaring” women off menopausal hormones “would be like telling someone with insulin-dependent diabetes that they should try to use other things besides insulin.”

Um, no, it wouldn’t be like that. People with diabetes who don’t take their insulin can die.

Not taking menopausal hormones isn’t going to kill anybody.

A generational shift in attitudes
Sometimes I wonder (despair?) if we’ll ever view menopause as earlier generations did — as a natural biological transition rather than some kind of “estrogen deficiency” condition that requires medical attention.

It’s a topic that medical writer Liz Scherer addresses this week in her Flashfree blog. (Hat tip: HealthNewsReview). Scherer focuses on an essay that appeared in the Journal of Aging Studies earlier this year. The author of that essay, University of Utah assistant professor of sociology Rebecca Utz, used data from two generations of women — those born in the 1920s and 1930s and their baby boom daughters, born in the 1950s — to examine the effect that the medicalization of menopause has had on attitudes toward menopause and aging.

The older women did not perceive menopause as a problem or disease but rather, something that “just happened.” As such, it was not part of their narrative and most were uncomfortable discussing it, primarily because they considered it private and “inappropriate for public discourse” much like sexuality or emotional instability. And the steps taken to address it: Watch and wait for it to be over.

The daughters, on the other hand, were likely to seek medical treatment as soon as symptoms appeared. This behavior is consistent with the premise that menopause has been increasingly medicalized. However, it wasn’t simply menopause that the younger women were fighting but on a larger level, aging.

“In other words, menopause was just the beginning of a long, downhill battle that cannot possibly be won,” but can be controlled and self-managed. Moreover, these women’s fear was not necessarily entrenched in hot flashes and night sweats, but in what the start of menopause meant in terms of the delineation between youth and middle/old age and even “end of life as we know it,” a new older life stage that was unwelcome. The “cure,” of course, were hormones and other pharmaceutically derived interventions, which represented a way to “suspend old age” and control the physiological aspects of aging.

Media has a role, too
Unfortunately, the “Menopause Industry” (a “profit-seeking enterprise comprising pharmaceutical companies and perpetuated by the media,” according to Utz) remains intent on persuading 40 million baby boomers that menopause requires significant medical intervention.

“While the companies create the drugs,” writes Scherer, “the media (whose increased attention to menopause, largely fueled by the wave of 1970s feminism and in part, funded by corporate interests) not only provide women with access to the information and resources that they seek but also contribute to perceptions of personal control among women who do not want to ‘sit back and let menopause just happen to them.’ The result is that the Menopause Industry has not only developed products that these women crave that allows them to win their battle against old age, but, continues to highlight the need for them.”

It’s time we get over our fears about menopause and aging. Our health depends on it.