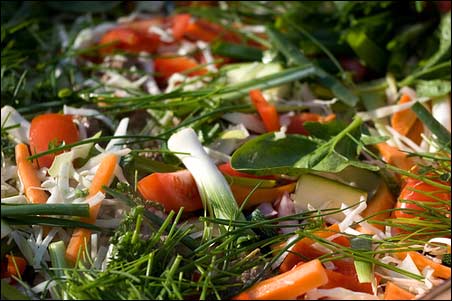 Creative Commons/Mike Haller
A new study found that a diet including cholesterol-lowering foods (a primarily vegetarian diet) had a much greater effect on cholesterol levels than a diet plan that only cut back on saturated fat.

For a long time, doctors have been telling individuals with high levels of so-called bad cholesterol to slice foods from their diet that are high in saturated fat, such as red meats, butter and hard cheeses.

This advice has persisted despite recent research, including a large meta-analysis, that has found no significant evidence that dietary saturated fat is associated with an increased risk of heart disease.

The emphasis on eliminating saturated fat may soon be a thing of the past, however. For, as a randomized study published Tuesday in the Journal of the American Medical Association suggests, when it comes to lowering LDL (“bad”) cholesterol, the foods we do eat may be much more important than the ones we don’t.

The new Canadian study found that following a diet that included cholesterol-lowering foods (primarily a low-carb vegetarian diet) had a much greater effect on cholesterol levels than a diet plan that only cut back on saturated fat.

Specifically, those on the diet rich in cholesterol-lowering foods saw their LDL levels drop an average of 13 percent over a six-month period compared to a 3 percent drop for those on the low-fat diet.

Study details
The study recruited 345 men and women from four different areas of Canada, of whom 267 completed the six-month trial. All had high cholesterol and were considered at risk of heart disease. None was taking statins, drugs that lower cholesterol, although some had in the past.

The participants were randomized into three groups. Two of the groups were put on a “dietary portfolio” that emphasized eating nuts, soy, and “viscous” (sticky) fibers, such as oats, barley, beans, and other vegetables. This diet was rich in plant sterols, which are known to block the absorption of cholesterol in the gut.

One of the dietary portfolio groups received seven counseling sessions to help them plan meals and otherwise stick with the diet. The other group received only two sessions.

The third group was instructed to lower their saturated fat. They were also told not to eat any of the foods in the dietary portfolio.

After six months, individuals in both arms of the portfolio diet saw a reduction in LDL cholesterol: 13.8 percent, on average, for those who received seven counseling sessions and 13.1 percent for those who attended only two sessions. Those drops are about half of that typically achieved by taking statins, the researchers noted, and represent about a 10 percent reduction in the participants’ 10-year risk of dying from heart disease.

LDL cholesterol dropped only 3 percent for those on the low-fat diet — a nonsignificant 0.5 percent drop in heart disease risk.

All three groups lost about the same amount of weight: an average of 3 to 4 pounds.

Too dramatic a change?
This study, like all studies, had limitations. To begin with, the study was short. Would results be similar over a longer period of time? Also, the participants purchased — and self-recorded — the food that they ate. Self reports can be inaccurate.

The study also had a high overall dropout rate of 22.6 percent. As the authors point out, that kind of attrition is common in dietary studies. Most of us find it difficult to change our eating habits for any significant length of time, even if we’re told our health depends on it.

And that leads to the question: The portfolio diet is essentially vegetarian; is that a diet people will accept?