A new tick-borne bacterium that can cause illness in humans has been discovered in Minnesota and Wisconsin, according to a study published Wednesday in the New England Journal of Medicine (NEJM).

Researchers, including those from the Mayo Clinic, the University of Minnesota, and the Minnesota Department of Health, have identified the new bacterium in more than 25 people in Minnesota and Wisconsin. The NEJM study reports on the first four of these cases.

Although the bacterium has yet to be named, it appears to come from the Ehrlichia genus. Two known species from that genus — E. chaffeensis and E. ewingii — can cause ehrlichiosis, a tick-borne illness characterized by flu-like symptoms, including fever, headache, muscle ache and, in rare cases, a skin rash.

The symptoms of ehrlichiosis are similar to those of another tick-borne infection, anaplasmosis, but the two are caused by different bacteria.

“Before this, we didn’t think that ehrlichiosis was present at all — or was extremely rare — in Minnesota and Wisconsin,” said Dr. Bobbi Pritt, a microbiologist at the Mayo Clinic and the lead author of the NEJM study. “So it wasn’t being routinely tested for.”

The discovery
The new Ehrlichia species was discovered in the summer of 2009 when a technician at Mayo’s Eau Claire hospital noticed abnormal results in a blood sample that had tested positive for ehrlichiosis.

“She kind of raised a red flag and brought it to our attention,” said Pritt.

Mayo launched an investigation, joining forces along the way with the Centers for Disease Control and Prevention (CDC), the Universities of Minnesota and Wisconsin, and several public health departments, including the Minnesota Department of Health. The researchers examined 4,247 blood samples collected from June 1 to Dec. 31, 2009, from people with suspected ehrlichiosis or anaplasmosis. The samples came from individuals in 45 states, but included 1,518 samples obtained from Wisconsin and Minnesota residents.

Using molecular as well as other blood testing methods, Pritt and her colleagues found that four individuals, two men and two women, had been infected with the new ehrlichia species. They ranged in age from 23 to 51 years, and all were residents of either Minnesota or Wisconsin. Each had experienced fever, headaches and fatigue, and one, who had cystic fibrosis and had undergone a lung transplant operation two years earlier, was hospitalized briefly as a result of the ehrlichiosis infection.

All four were given the antibiotic doxycycline, the standard medication for treating ehrlichiosis, and made full recoveries.

Since then, about two dozen additional cases have been identified — all in Minnesota or Wisconsin, said Pritt. There have most likely been other cases that have gone undetected, she added.

The researchers also found the new bacterium in black-legged ticks (sometimes called deer ticks) and in the blood of two mice — but again, only in specimens collected from Minnesota and Wisconsin. 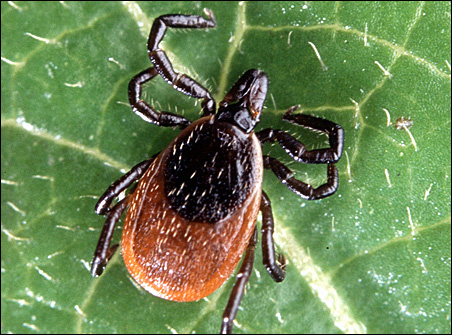 Photo by Scott Bauer/USDA
Climate-change models for Minnesota indicate that the state is going to get warmer and more humid — ideal living conditions for many disease-carrying ticks.

The bacterium appears to be closely related to another species of Ehrlichia — E. muris — that infects small rodents and deer in Asia and Eastern Europe.

“It’s never been described in the United States before, or even in North America,” said Pritt. “How it got to the U.S. is really unknown at this time.”

Not entirely a surprise
The sudden appearance of a new tick-borne organism that can cause illness in humans is not that unusual, according to David Neitzel, an epidemiologist with the Minnesota Department of Health and one of the co-authors of the NEJM study.

“I’ve seen the emergence of several different disease organisms [during the past two decades], so the emergence of another one is not a surprise at all,” he said. “In fact, I’m confident we’ll find more in the future.”

In June, for example, the Health Department added the rare Powassan (POW) virus to its list of Minnesota’s tick-borne diseases. POW, which is related to the West Nile virus, infects the central nervous system and can lead to two life-threatening illnesses, encephalitis and meningitis.

Climate change may be partly to blame for the appearance of new tick-borne diseases in the Upper Midwest.

“These ticks are very susceptible to drying out,” said Neitzel. “That’s one of the main reasons they die — and one of the main reasons we find them in bushy and wooded areas.”  Climate-change models for Minnesota indicate that the state is going to get warmer and more humid — ideal living conditions for many disease-carrying ticks, Neitzel added.

A new test
The illness caused by the new Ehrlichia bacterium does not appear to be as severe as that caused by the POW virus — or even the tick-borne bacterium that causes Lyme disease. With only 25 or so known cases, “it’s still a little bit too early to say what the full clinical spectrum will be,” said Neitzel, “but a lot of the patients we’ve seen so far have been less severely ill than those with other diseases.”

If you believe you’ve been exposed to tick bites and have a fever, headache or other flu-like symptoms you should see your physician, said Pritt. “Based on the patient’s presentation the physician may decide to order some tests for tick-borne diseases,” she said. “In addition, an antibiotic may be prescribed.”

Right now, Mayo is the only facility in Minnesota with such a test, although the CDC is currently attempting to develop an antibody test for the new bacterium, said Neitzel.

For information about how you can protect yourself and your family from tick bites, visit the Minnesota Department of Health’s website.