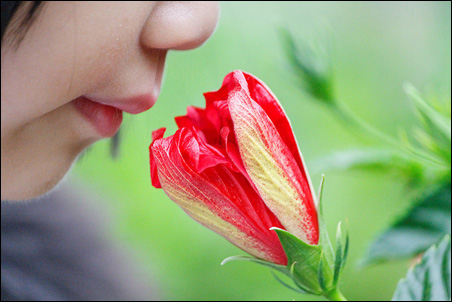 Photo By Dennis Wong
Odor-cued memories appear to take us back to the first decade of our life.

The Boston Globe ran an intriguing article last month on how scientists and historians are delving “into our olfactory past, trying hard to understand how people experienced the world with their noses — and even save scents for posterity.”

In the article, freelance writer Courtney Humphries describes how a Swiss fragrance chemist is traveling the world, trying to capture the scents of hundreds of rare and endangered species and how archeologists are using modern analytical technologies to bring ancient scents to life.

Scientists at Bonn University’s Egyptian Museum, for example, are trying to raise from the dead, so to speak, the aroma of the contents of a 3,500-year-old perfume bottle from the reign of the Egyptian female pharaoh Hatshepsut.

“Smell is unique among the senses in the way it is processed by the brain — olfactory information travels directly to a brain region linked with the hippocampus and the amygdala, sites of memory and emotion,” writes Humphries.

“Scientists have suggested that the way smell is processed makes smell memories particularly strong and persistent. But outside of our memory, smells themselves are ephemeral: They are formed by volatile chemical compounds that can easily disperse and disintegrate. So smell is both a powerful part of our experiences and an evanescent one.”

The Proustian phenomenon
As Marcel Proust so famously demonstrated in his autobiographical novel “In Search of Lost Time,” odors are particularly good at evoking emotional memories of our childhood. (For Proust, those memories were rekindled with the aroma — and taste — of freshly baked madeleine cakes and linden tea.)

When we’re middle-aged or older, visual or word cues tend to conjure up memories from our teen and young adulthood years, research has shown. But odor-cued memories appear to take us back even further, to the first decade of our life. Not only that, some research suggests that the emotional sensation of traveling back in time is stronger (but not necessarily more accurate) when the memory has been triggered by an odor.

A 2006 Swedish study, for example, asked 93 people aged 65 to 80 to take a whiff of 20 different odors — among them whiskey, cloves, red wine and soap. The participants were then questioned about which autobiographical memories, if any, the odors evoked. The highest number of memories associated with the olfactory stimuli came from the participants’ first decade of life.

So the instincts of Proust — and other writers — about the special evocativeness of memory-inducing odors may be correct. “Nothing revives the past so completely as a smell that was once associated with it,” wrote Vladimir Nabokov in his 1925 novel “Mary.” Ecologist Rachel Carson echoed that sentiment decades later when she noted that “the sense of smell, almost more than any other, has the power to recall memories.”

Interestingly, future historians who try to document the prominent odors of early 21st century America may end up focusing on cinnamon. As one scent historian told Humphries, “If you saved the mall smell, you’d see that people were obsessed with cassia cinnamon” — the ubiquitous odor of Cinnabon.