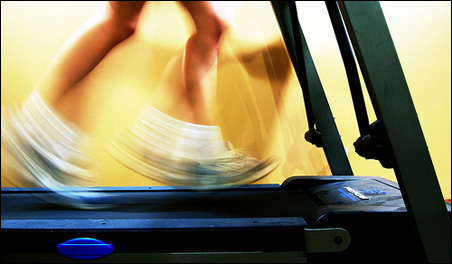 Creative Commons/Sasha Wolff
If you want to get rid of excess body fat — particularly the kind that’s putting your health at risk — you need to engage in regular, semi-vigorous aerobic exercise.

Resistance training (such as weight lifting) is great for building stronger and even leaner bodies, but if you want to get rid of excess body fat — particularly the kind that’s putting your health at risk — you need to engage in regular, semi-vigorous aerobic exercise.

That’s the message from a study published earlier this month in the American Journal of Physiology, Endocrinology and Metabolism.

For the study, a team of Duke University researchers recruited 196 sedentary and overweight (but otherwise healthy — no history of diabetes or heart disease) men and women, aged 18 to 70. The participants were randomized into three groups. One group did the equivalent of 12 miles of jogging each week at 75 percent of their maximum heart rate. (This aerobic exercising was done on a treadmill, an elliptical machine or a stationary bike.) A second group did three sets of eight resistance exercises (8 to 12 repetitions) three days a week. The third group did both types of exercise.

The exercising was closely monitored to make sure that the participants stuck with their assigned exercise program.

After eight months, all three groups had lost some subcutaneous fat — the kind that lies just under the skin (and whose loss can make you look thinner). But participants in the aerobics and the aerobics-plus-resistance-training groups had significantly reduced their visceral and liver fat, while those in the resistance-training-only group had not.

There’s an important health difference between subcutaneous fat and visceral and liver fat. Visceral fat is the kind that lies deep within the abdomen and fills in the spaces between the internal organs. Liver fat is, as its name implies, is the fat that accumulates in liver cells.

As a growing body of research suggests, these deeper kinds of fat are the ones we really need to be worried about. Both visceral and liver fat are associated with an increased risk of heart disease, diabetes, certain types of cancer, and premature death.

Other findings
The participants in the study who did aerobic exercise also saw improvements in other risk factors for disease, including insulin resistance and triglyceride levels.

Interestingly, none of the groups altered their intake of calories and alcohol as a result of the exercise. But those in the aerobics groups burned off an average of 67 percent more calories.

That extra burning of calories may explain the reduction in visceral and liver fat, noted the study’s authors, although other factors could also be involved.

The bottom line from this study? Both aerobics and resistance training benefit your body, but if your exercise time is limited, you’d be wise to focus on aerobics.

For, as the study’s authors note in their conclusion, when it comes to reducing body weight and measurements of visceral fat, total abdominal fat, liver fat and insulin resistance, “a moderate amount of aerobic exercise is the most time efficient and effective exercise mode.”